That's it. Emirates First Class have officially ruined all my future travel plans from now on.

Flying like this is so far removed from the low-cost Economy Class that most of us experience.

It's also a big step up from Business Class cabins.

The best way I can put it is that it's like being in a gold class cinema for 14 hours and people keep bringing you super expensive food and drinks. What's not to like? 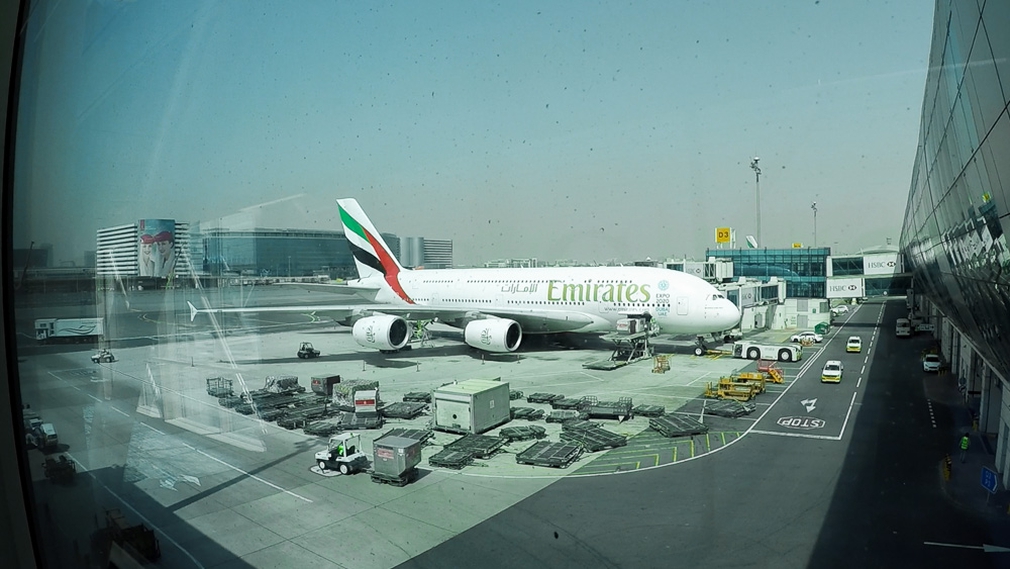 One of 100+ Emirates A380 parked up at the gate in Dubai
It's like being in a gold class cinema for 14 hours and people keep bringing you super expensive food and drinks.

In Australia, Qantas points are fairly easy to accumulate. Thankfully. Approximately 60% of all frequent flyer points are generated from credit card spending, not from flying frequently. In Australia, with the right frequent flyer credit card you can build up more than enough points for an amazing flight. If you buy an Emirates First Class flight then you'll be on the hook for around $8,000. Supply and demand, and dynamic pricing make the cash tickets to prices surge or relax. I've seen this EK406 flight sell for as much as $10,000 AUD.

Not many people have $8,000 to splash out on a one-way ticket like this. My educated guess is that most of the other passengers flying Emirates First on this route do so by booking on QFF points or Emirates Skywards Miles. That means you'll yield a very healthy five and a half cents per point spent.

We've blogged about the difficulties in booking points seats (or classic award seats) on Qantas.com. So if you see the gold First Class seat come up, smash that button!

Worth mentioning for any readers starting out with an airline rewards program, I had the most basic entry-level status and zero Emirates Skywards Miles when booking this seat. However, I was only Silver with Qantas at the time of booking. Clearly neither of those facts makes a difference in seeing more Emirates seats availability in the Qantas flight award booking system or snagging the First Class.

Myth about when to book

Let me dispel another points myth while I'm at it. You don't need to book your point seats 11 months ahead. You can leave it late. Very late. The cut off can be as little as an hour before the flight takes off. One Qantas customer rep on live chat even said that 30 minutes before the gate closes is still possible. In anyone's book that is cutting it fine!

I've searched for points seats for weeks on end waiting for them to be released and then a day or two before I wanted to fly a points seat might appear! The latest I've left it was an SQ flight booked over the phone just six or seven hours before the flight was scheduled to depart. Check out our huge guide on how to book flights and upgrades on points. You can use services such as Expert Flyer to help find & book better.

DXB airport is huge with multiple levels inside each terminal building and trains running between each massive terminal. Emirates like to get flights in and out of the airport quickly and in two waves—one in the morning and the second later in the day—so keep an eye on the time.

Emirates like to get flights in and out of the airport real quick so keep an eye on the time.

So like me, if you arrive into Dubai in a bit of a haze from an overnight flight with only an hour or two until your next flight then watch the clock. My Emirates flight (EK164) from Dublin to Dubai arrived just on 8am. The onward Dubai to Melbourne flight was scheduled to depart at 9:45am. By the time your flight arrives in Dubai, the plane taxi's over the gate, you disembark, go through a security check (even using the Fast Track), then you get across to the gate for the next flight you will not have much time to do lots, let alone relax in the Emirates First Class lounge or hit up duty free shopping.

Boarding the A380 flight

Flying on one of the largest aircraft to ever fly is exciting enough. Even if you've done it before I am always taken aback by the sheer size of the superjumbo. 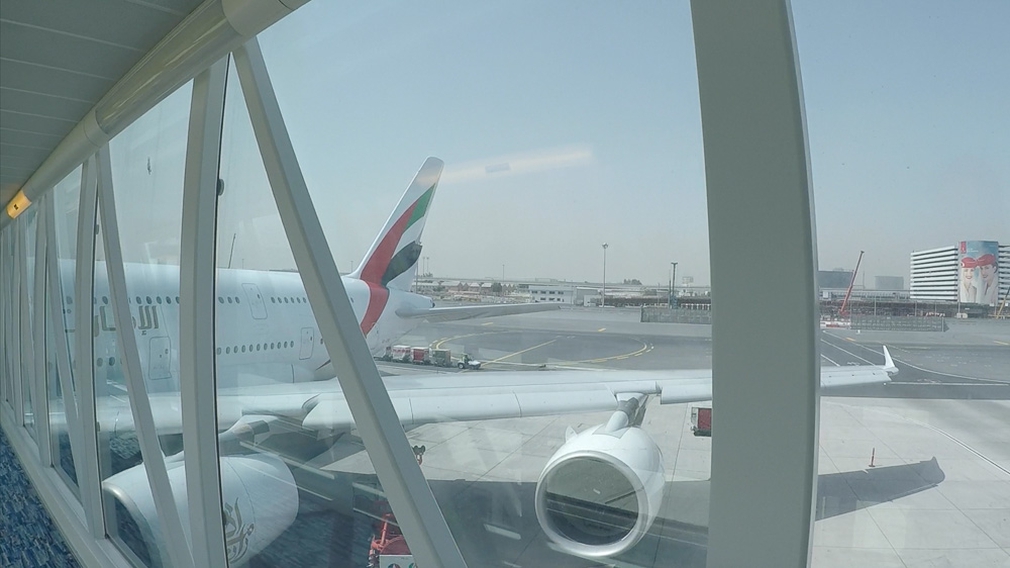 A380 massive wingspan and engines at Dubai airport

The dedicated and hassle-free boarding is part of the appeal of flying First Class. Boarding the gigantic aircraft along a special jet bridge to the upper level directly into the First Class cabin sets the tone for a great flying experience. You are parting with 144,000 points after all. 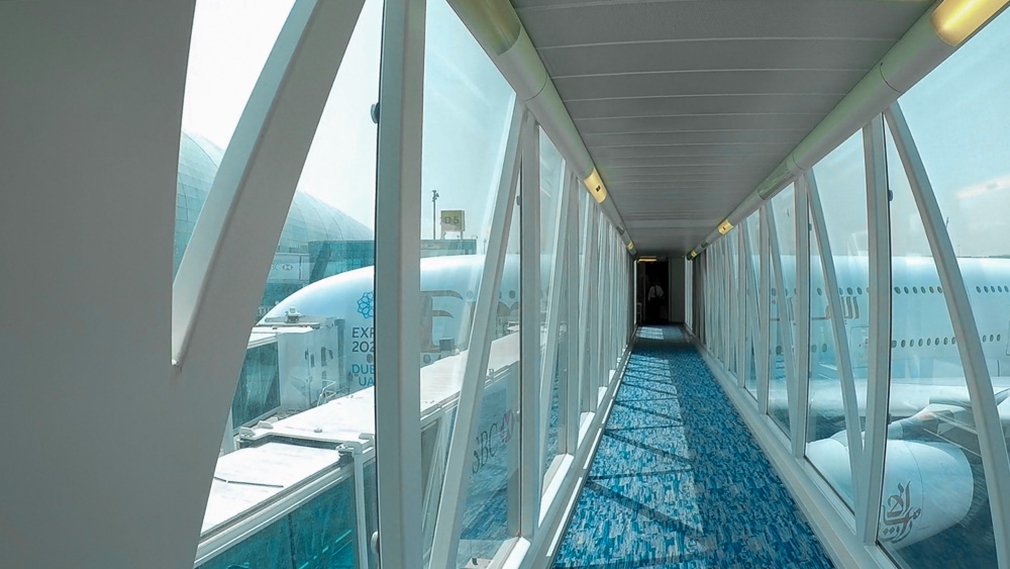 Boarding for First Class on the upper deck of Emirates A380

The friendly international cabin crew that work in First Class have to have risen through the ranks to serve in First Class. You'll be taken care of incredibly well, similar to how you are welcomed into a luxury hotel. 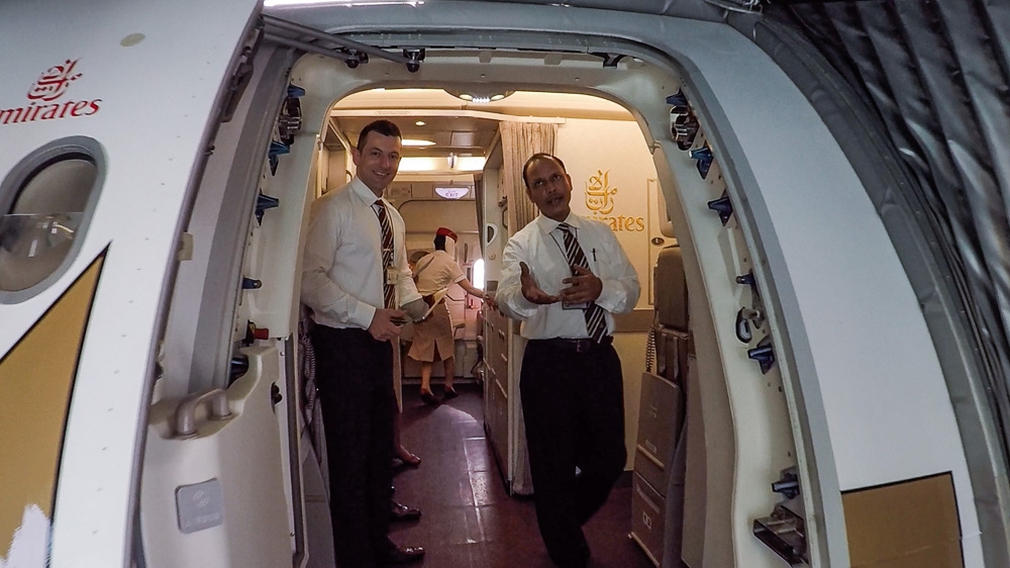 Welcome aboard the Emirates A380

Just a minor thing that only AV geeks will notice is that since the luxé First Class cabin is up at the nose on the upper deck of the A380, it means it feels compact. You might like it, you might not. 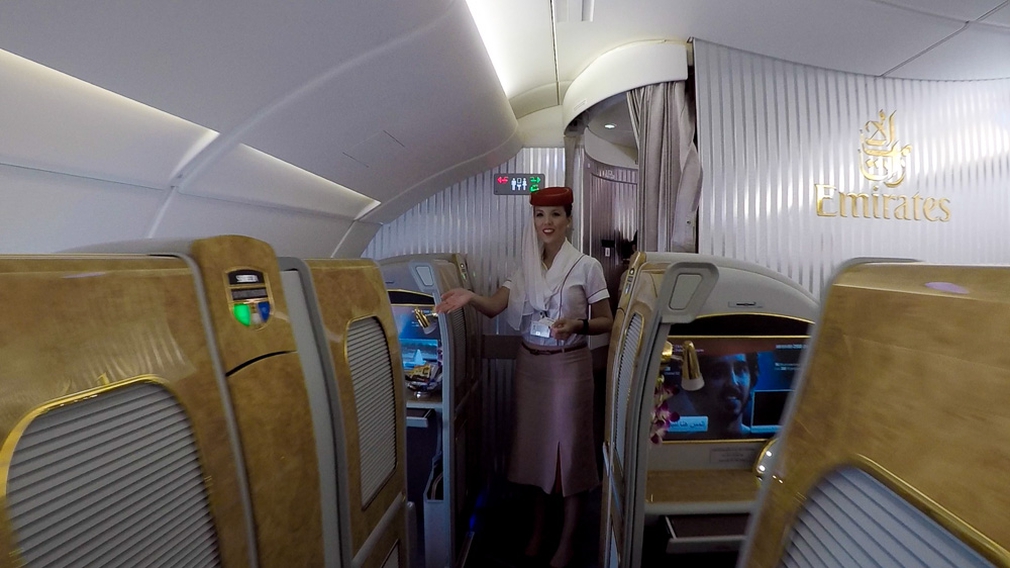 Shown to Seat 1A on Emirates First Class Cabin A380

On this Emirates A380 the 14 First Class Suites fill this section of the aircraft in a 1-2-1 configuration. The middle seats are best for a couple travelling together since the middle divider can come down so you can see each other. That's double the number of suites on the Boeing 777-300ER flown on my previous Emirates flight from Dublin, Ireland to Dubai. 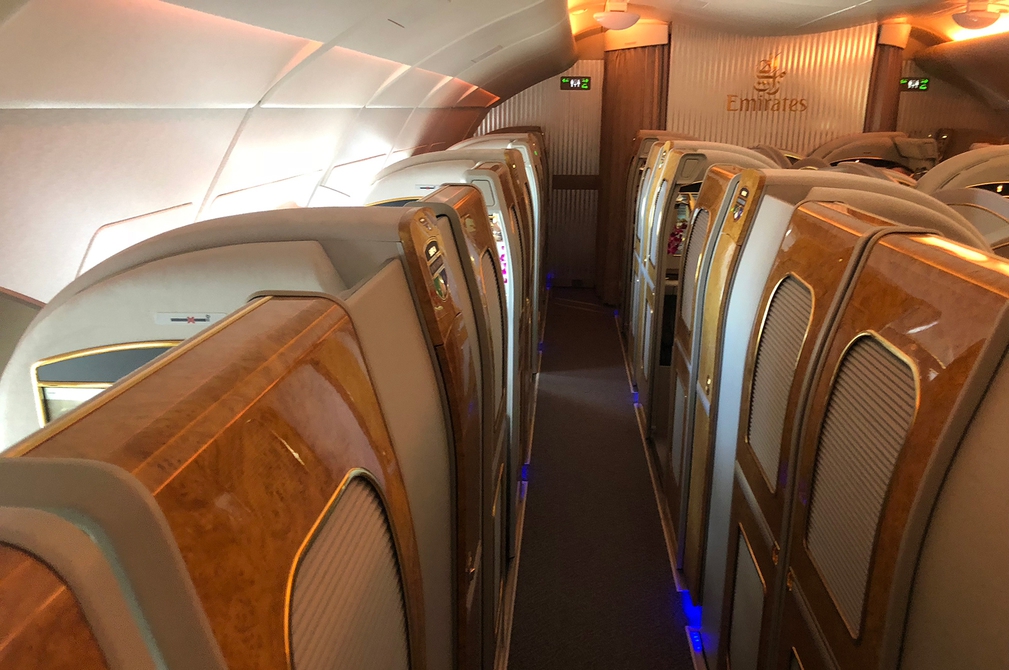 The luxurious First Class Cabin on Emirates A380 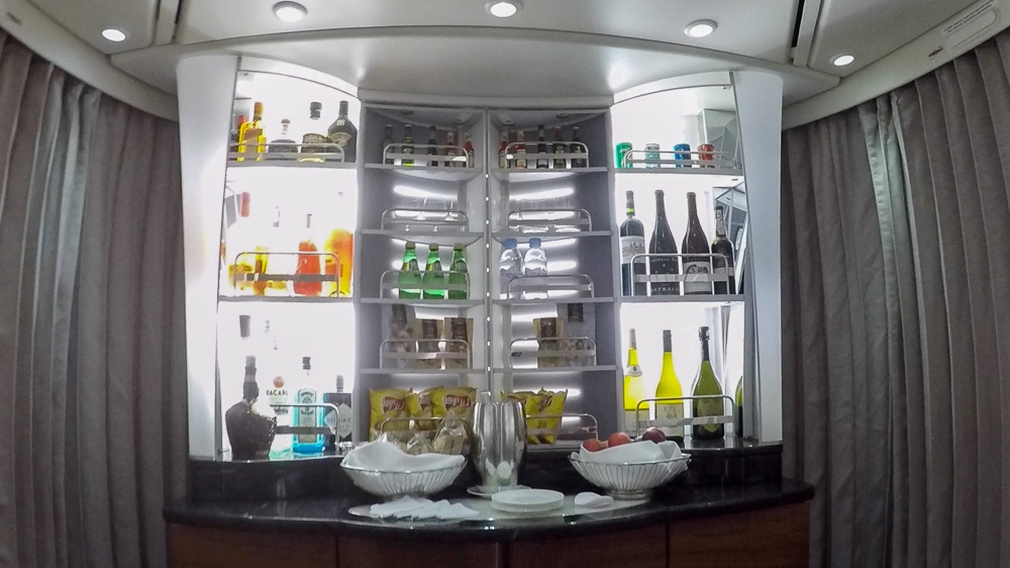 My seat for the next 14 hours

This Emirates A380 and the current fit out has flown hundreds of thousands of miles. And you can tell. I don't like to even say this, but the fit out feels ever-so-slightly dated. Emirates is said to be refreshing the First Class cabin and this will be met by a lot of excitement. 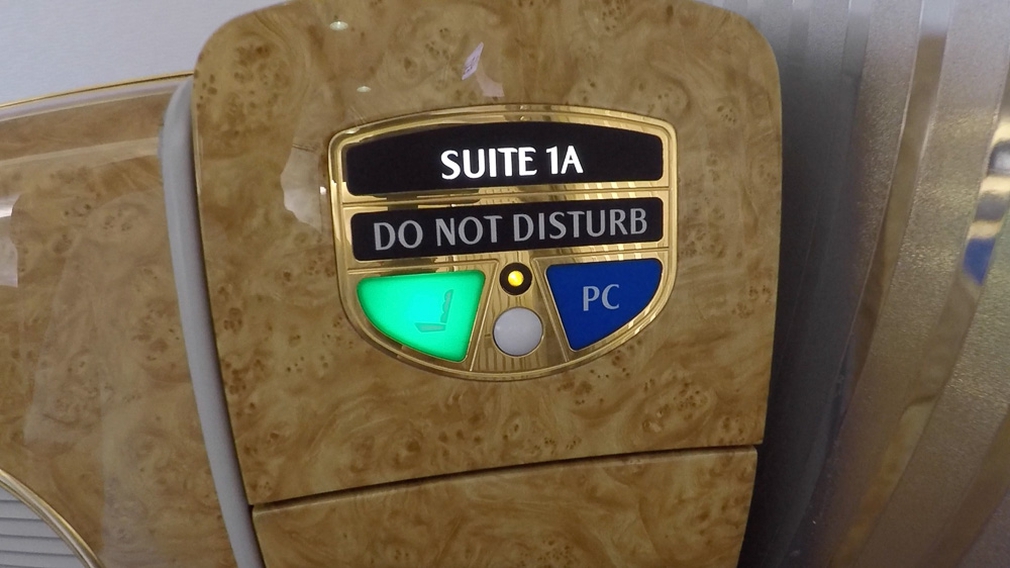 Each suite has closing doors for total privacy. Like me, if you're travelling solo then the best seats, at least in my opinion, are the window seats—you get 3 windows all to yourself to soak in the view. There's virtually no difference between Seat 1A on this A380 and the Boeing 777-ER. 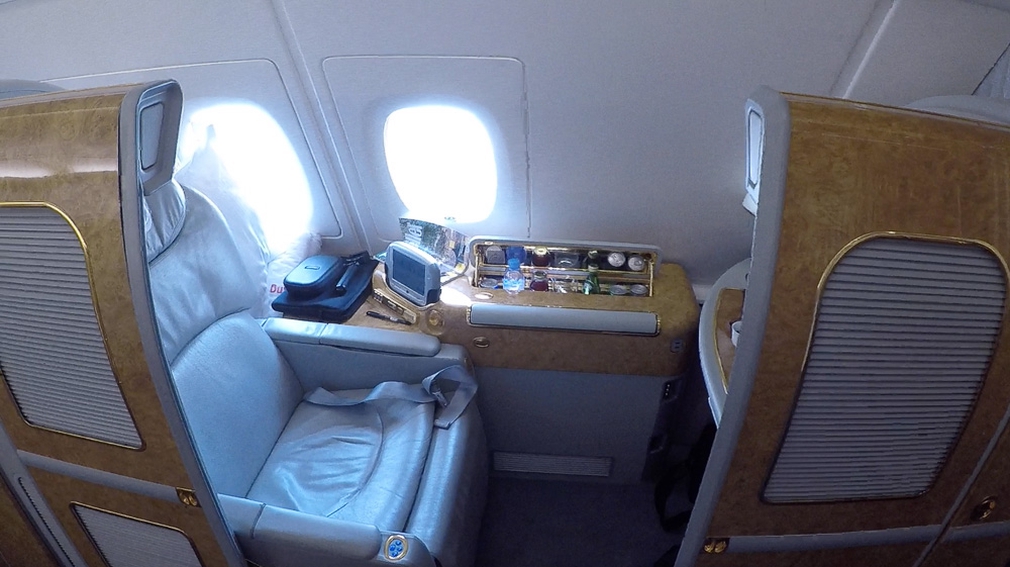 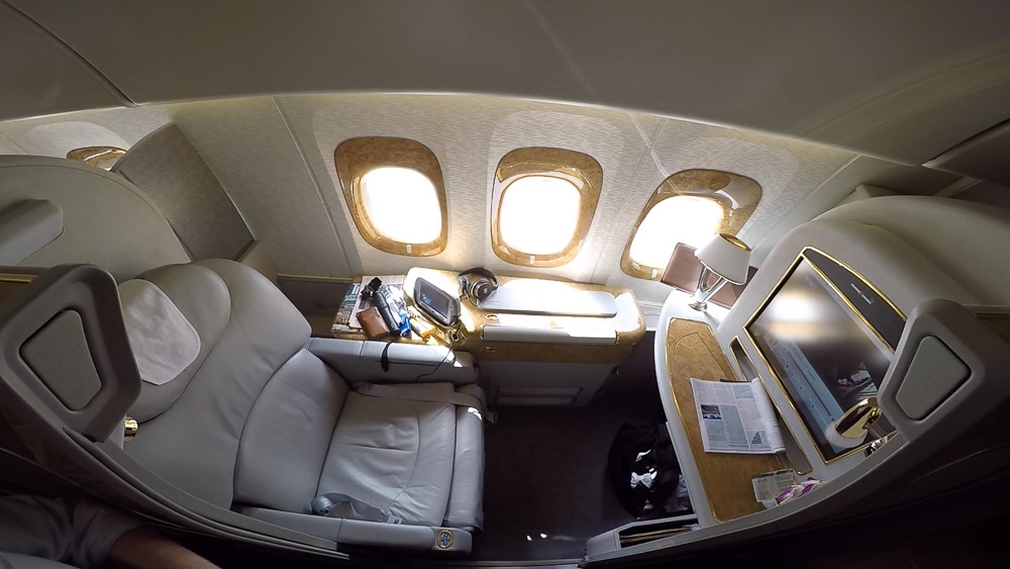 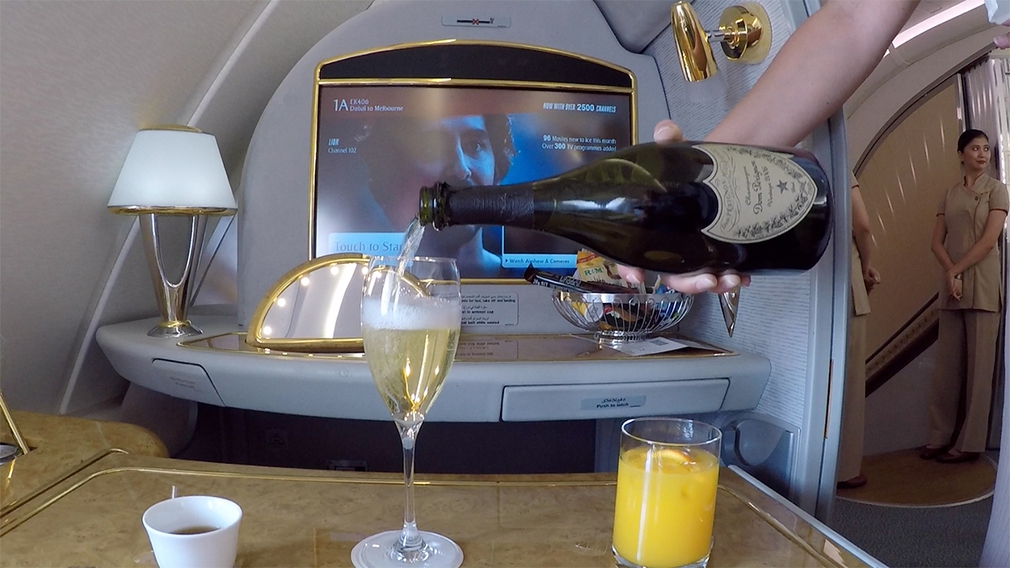 The obligatory pre-take off expensive champagne and fresh orange juice 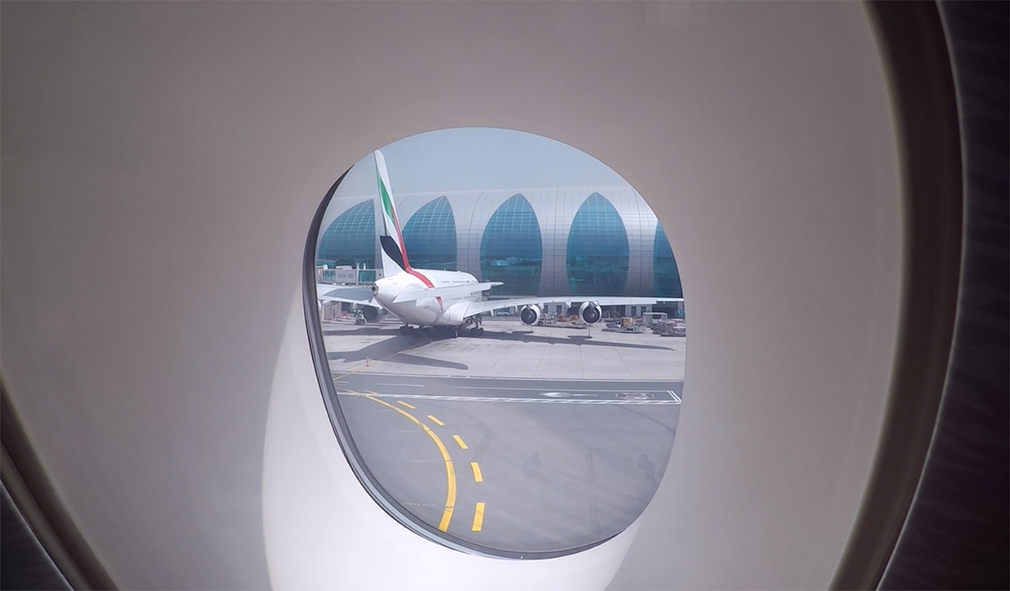 Pushed back and taxing out to the runway

If you want to go behind the curtain into the Business Class section check out our flight review of Brisbane (BNE) to Singapore (SIN) or Denpasar (DPS) to Munich (MUC) both flying on Boeing 777-ER's.

My advice is to eat very lean on the day before you fly because the cabin crew will offer you food and drinks for the entire flight. You can order anything you want, anytime you want. And it's hard to say no. You've redeemed over 100,000 points to be there, so why not? 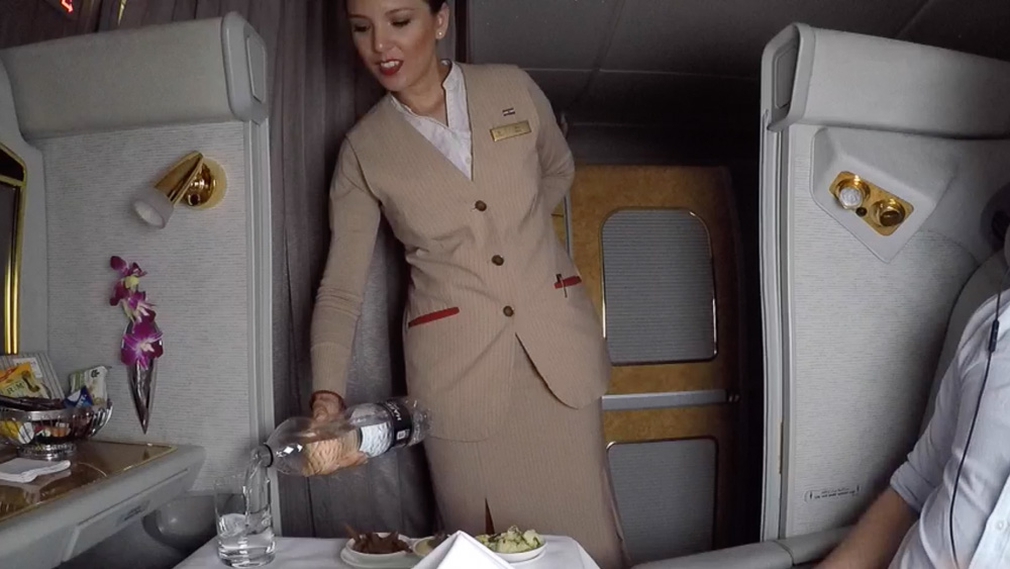 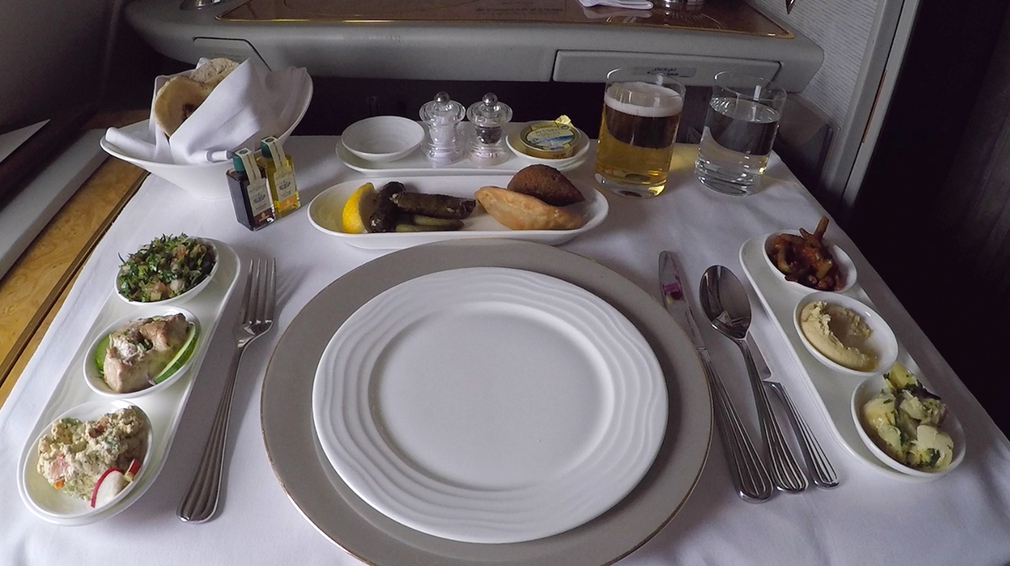 Let's do lunch in the sky 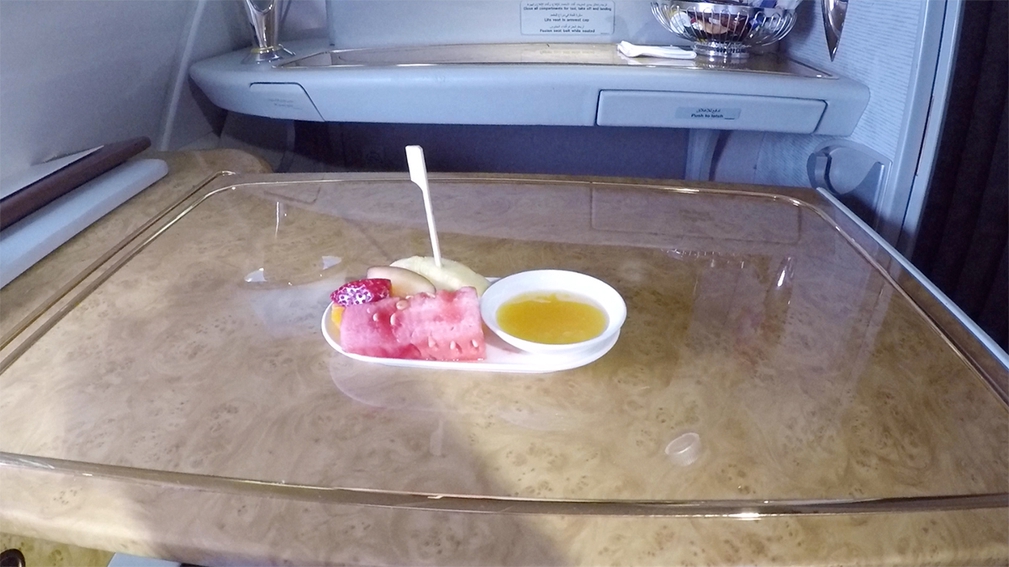 One of many of the snacks you'll be served.

Away from your seat, the bar area makes a welcome social break during the flight if you want to chat to other passengers from Business and First Class. The cabin crew at the bar are also usually up for a chat even though the novelty has long since worn off for them.

Freshen up on a flight?

Showering at 30,000 ft is more than a novelty. It's actually perfect for a pre-arrival freshen up. Usually, a freshen up on a flight this long is limited to a hot towel and a change of t-shirt. Not so in Emirates First Class. If your First Class cabin isn't fully occupied then you might be able to book in for two showers! You can book a 30 minute-long slot, but that does not mean you can spend the whole time in the shower. You get 5 minutes of water supply per slot, but you can turn the supply on and off easily so you can stretch it out a bit and relax while sitting on the built-in seat. 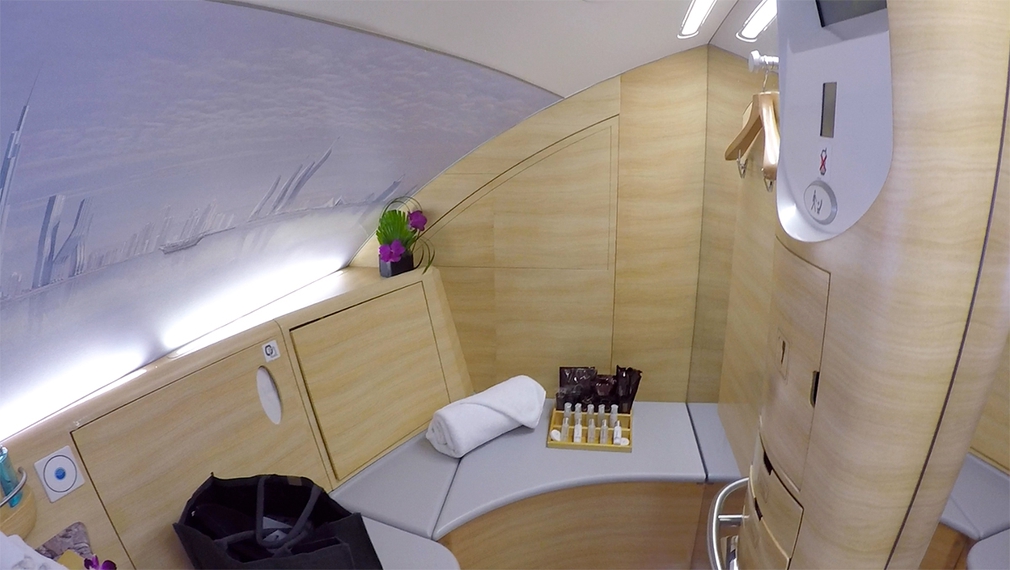 Huge shower bathroom on Emirates A380 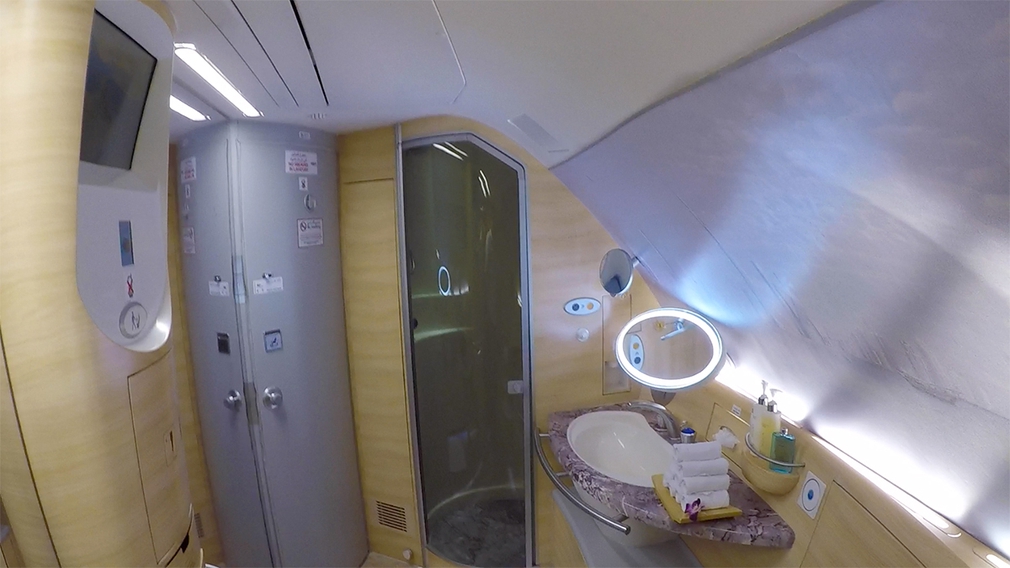 How to get the points

The very simple answer is to get the right credit card and pump as much spend through it as possible. Pay your card off in full every month and accumulate those points for an amazing experience like this flight. If you don't already have a credit card that earns frequent flyer points, then head on over to our comparison page to find yours.

The privacy and comfort of the fully lay flat seat makes for a well-rested traveller. The food was delicious. The massive 27-inch inflight entertainment system was well stocked with current movies.

And what makes this all so incredible is that flying Emirates First class on a long haul flight is actually not out of reach. At 144,000 Qantas Points plus AUD $700 it's much more achievable than people think. Get the right credit cards and it'll make all the difference. If you need to justify the cost that's just over 10,000 points per hour on this flight.

Booking Emirates First Class using your Qantas frequent flyer points is an expensive use of points. However, it's the experience of a lifetime and you will be hard pressed to find something to dislike. 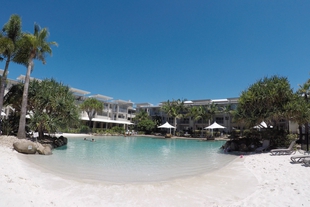 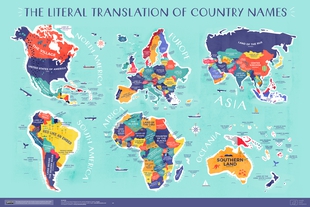 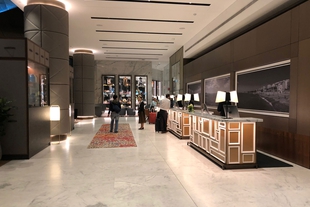