What's not so good?

Receive 120,000 bonus Qantas points and $275 back when you spend $4,000 on eligible purchases in the first 3 months from approvala.
Earn 1 Qantas Point per $1 spent on eligible purchases up to $7,500 per statement period.
Earn 1 additional point per $1 spent on selected Qantas products and services in Australia.
Save $99.50 with its Complimentary Qantas Frequent Flyer membership offer (new members only).
Relax in luxury while you wait for departure with two Qantas Club lounge access invitations per year.
A range of complimentary insurances for travel and purchase.
Google Pay™, Samsung Pay™ and Apple Pay let you use your compatible Android or Apple device to tap and pay.
0.5 Qantas Points per $1 spent on eligible purchases above $7,500 per statement period.

Disclaimer (2): Reviews rely upon third party information that may not be correct or may be changed without Credit Card Compare’s knowledge. You must carefully consider your own circumstances before making any commitments and confirm all offers and terms with credit card providers before accepting them. Please refer to our T&Cs for more.

Got your specs handy? The ANZ Frequent Flyer Black Credit Card comes with Qantas Frequent Flyer points (a sign-up bonus and ongoing points earning) and the extensive suite of member benefits you’d expect from a prestige black card with a mammoth annual fee, but you’ll need to be all over the small print to make sure you extract the maximum advantage for the extra dollars you pay.

High annual fee, but it could be worth it

And the annual fee will seem insignificant in the first year when it is wiped out by sign-up benefits.

The earning rate is:

That $7,500 threshold is probably not going to be a problem for most cardholders in most months, so it’s likely that the vast majority of card spending will earn 1.0 points per dollar.

ANZ will welcome you as a new credit card customer with:

The benefits aren’t confined to the first year. You’ll get these additional complimentary privileges for holding the card, every year:

There’s no getting around the steep annual fee, the high ongoing purchase and cash advance interest rate of 20.24% p.a., but holders of black cards don’t usually plan to take cash advances or rack up interest-bearing credit card debt.

You also have to be sure that you want Qantas Frequent Flyer points, because there are no options to earn, or transfer to, any other type of reward or airline points.

If you find the $425 annual fee too much to swallow, consider the ANZ Frequent Flyer Platinum Card instead, with a lower annual fee but also lower points earning rate. NAB, Westpac, St.George, Bankwest, Citi, Commonwealth, American Express, HSBC, Qantas Money, Bendigo Bank and Woolworths also offer cards directly linked to Qantas points. You can check them out on our Qantas cards page.

. . . Qantas Frequent Flyer points collectors who prefer the global acceptance of a Visa card, in contrast to the lower acceptance rate and higher surcharges attracted by an American Express card. The substantial bonus points and cashback make the card particularly attractive in the first year, while regular travellers are likely to consider that the lounge passes and complimentary insurance more than offset the annual fee in subsequent years.

Great card, but is it worth it?

Reviewed and not recommended by Sacha on 08 Dec 2016

I signed up for this card primarily for the bonus frequent flyer points offer, and also the high ongoing frequent flyer points earning. The first year’s fee was waived, and thankfully, because it’s $425 per annum and the interest rate is high. That’s when you have to question whether you will earn enough points to offset the fee, and frankly I’m not sure paying that much in fees is worth the earn rate. There aren’t many other benefits that will result in me retaining the card beyond the 12 month mark.

I have had two major interactions with ANZ customer service regarding the card, and both have been fantastic. ANZ also have Apple Pay, which is a bonus.

Overall, I do not believe the card is worth the annual fee.

Points earned are better then other credit cards

Reviewed and recommended by Esther on 27 Sep 2016

I cancelled CBA Platinum credit card as this one was miles ahead with points per dollar, and the extra benefits such as being able to go into the Qantas lounge, etc, are excellent. The insurance is better and many other options are given.

The only downside is that, after the first year being free, the annual fee is crazy, so we plan to leave before getting stung, unless we can get this waived.

Ignored notification that I was travelling

Reviewed and not recommended by Joe on 25 Sep 2016

I am unimpressed with the recent poor service from ANZ while I was overseas recently in the US. I notified ANZ of my trip prior to leaving. However, they blocked my card on two occasions due to not realising I was overseas at the time, even though I had told them. I called using my mobile phone, which incurred roaming costs which they refused to reimburse. I have taken steps to cancel this card and never bank with them again.

Love the points for everyday spending

Reviewed and recommended by Rosie on 20 Sep 2016

I’ve earned a few free flights out of using our credit card for everyday spending. We put all of our spending on the card, then put our pay straight on it to avoid paying interest. It works a treat!

It’s a little annoying that you earn the main points using AmEx since not many places take it without surcharge, so if you aren’t careful it could end up costing lots more than it’s worth.

Happy with the card

Reviewed and recommended by Samantha on 13 Jul 2016

Good card. You receive 2 cards (both a Visa and American Express), which means it is accepted at most places. Fees are a little, but there’s good points earning for Qantas Frequent Flyer. I would recommend. Overall, I am very happy.

Reviewed and recommended by Bikram on 03 Jul 2016

ANZ Black Frequent Flyer is a premium credit card suited mostly for frequent air travellers with air lounge passes and travel insurance included. The card also comes with 75,000 worth of Qantas Frequent Flyer points, which is equivalent to around $750 in gift cards.

Love the points for every day spending

Reviewed and recommended by Rhonda on 01 Jul 2016

I quite like earning frequent flyer points for everyday spending, although the annual fee is pretty high so you really have to use it lots for the points to be worthwhile. The AmEx companion card gets more points, but I often find there’s a surcharge for using it or it isn’t accepted. The Visa doesn’t give many points at all.

A good middle of the road card

Reviewed and recommended by Geraldine on 01 Jul 2016

I’ve had this card for years and during that time it has changed from blue to gold to platinum to black. There may be better deals around, but I can’t be bothered to keep changing and I’m happy with this one.

I don’t really keep track of my frequent flyer points, so it is always a delight—like in November—when I can go and see a friend in Melbourne and fly more or less for free.

ANZ is solid and reliable—as much as any bank anyway—at one stage they told me about weird activity on my card in Europe and quickly replaced it.

I get a lot of frequent flyer points

Reviewed and recommended by Drew on 01 Jul 2016

I have this card purely for the Qantas Frequent Flyer points. It’s expensive, yes, but I feel the benefits outweigh the cost at this stage. The main reason I first got attracted and ended up choosing this card was for the 75,000 bonus points that were on offer. Also there are other benefits like free entry into airline lounges—domestically and internationally—and having no annual fee in the first year.

I am happy with this card at this stage.

I signed up for 75,000 sign up bonus QFF points with the first year’s annual fee waived and have already claimed the annual set of complimentary lounge passes. I found the application and service excellent and very streamlined.

The annual fee is very expensive, but you need to weigh it up against the points you get, which I think are market-leading. Overall, I would recommend this card.

Does everything it's supposed to

Reviewed and recommended by Monique on 14 Jun 2016

This is a great credit card with a good points earn rate for each transaction and also comes with a companion AmEx. There are excellent bonus point offers available throughout the year and free annual membership deals, so keep your eyes open for these. Easy online account management and the app is also great. Excellent freebies. Highly recommended.

Reviewed and not recommended by Cher on 13 Apr 2016

I am an ANZ customer and recently changed over from the rewards program to the frequent flyer program. New customers received a bonus for joining, existing customers get nothing for their loyalty. Not only that, I got slugged with card fees of $165.00. I was advised by an ANZ operator that due to the paid breakfree package I was on with ANZ, I would not incur any fees to change my card over. I have now sent numerous emails via my online account and receive only generic responses. I would have been better off changing my card over to the NAB loyalty program. Existing ANZ customers beware before changing card programs and get everything in writing prior as ANZ do not honor the information operators give. In a nutshell, the additional fees negate the frequent flyer program. Existing ANZ customers beware!

I use the AmEx card as often as I can due to the extra points earned with it. It’s nice to have the dual cards so one can be kept as back up. The services offered are pretty great and I received 50,000 bonus points just for opening an account and the first year’s annual fee was waived.

Pleased with this card

Reviewed and recommended by Shase on 29 Oct 2014

Cool stuff you can get with your points 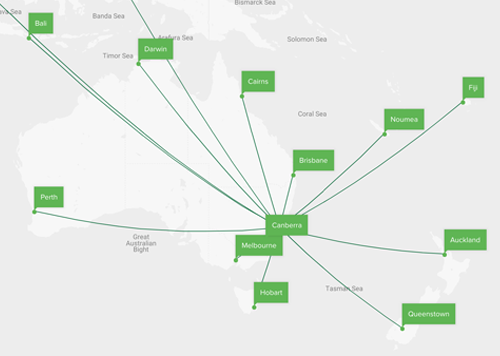 Explore where your points can take you
42 destination ideas

Earning points with this card

Minimum criteria for this card

What you need before applying

Be over 18 years old
You are a resident or citizen of Australia
Have a good credit history
You have your personal details ready to complete the online application
Have not applied for multiple credit cards recently
Non-permanent resident with more than 9 months remaining on your Visa
Age Pension, Disability Pension and Veteran's Pension are acceptable.
Carer's Allowance, Child Support Payments and Family Tax Benefits and Parenting Payments are acceptable.
Joint applications are not allowed
Overseas Pension and Widower's Pension are not acceptable.
Austudy, Foster Care Allowance and Youth Allowance are not acceptable.
Disclaimer: The minimum criteria are intended only to be a guide. Your application may still be rejected by the bank even if you can answer 'Yes' to all the minimum criteria. The final decision regarding your application is up to the bank.

This card is listed in these comparisons

Protect your identity. Monitor your credit score for free.

Join more than 17,000 Australians and get your score today.
Get Your Free Credit ScoreorFIND OUT MORE

People are happy
Rated 4.8 out of 5 for customer satisfaction.
You may have seen us in
Compare these cards:
CompareClear