The history and development of credit cards is strongly reflected in the media used in their advertising. This post brings together 19 fine examples of vintage print ads which trace credit cards' origins in traveller's cheques and charge cards for shopping chains and gas stations, to the range of international brands that dominate the market today. 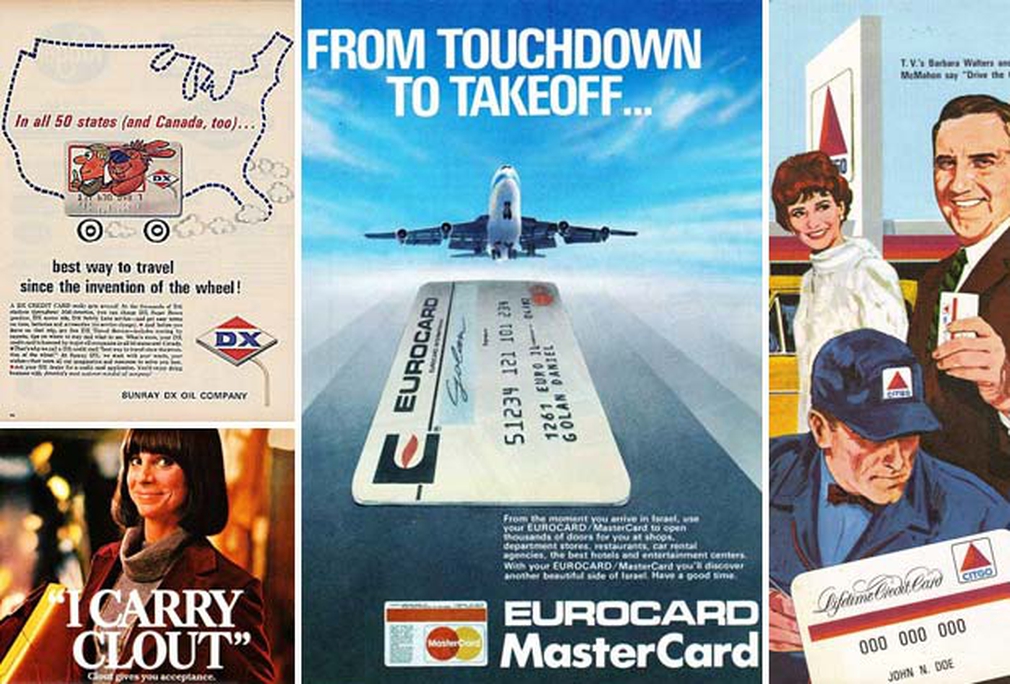 Due to their proliferation into many areas of our lives, credit card companies such as MasterCard, Visa and American Express have created instantly recognisable brands, thanks in part to a series of highly successful and memorable print campaigns throughout the their history.

In hindsight what's most striking, perhaps, is the very noticeable shift away from promotion to a niche upperclass market to marketing credit cards to us all. Premium credit cards are seeing a resurgence in popularity led by American Express's Centurion card, but much like air travel, much of the glamour in their advertising has long gone. These companies now use television and online marketing to build awareness of their brand, but back in the day they relied heavily on print media to engage with early adopters. As you'll see, it's clear that in the age before credit became readily accessible, the banks pitched their cards as desirable lifestyle accessories for the rich jetset class. MasterCard in particular seem to intentionally identify themselves with making dreams come true, a theme that's still going strong today in their 'Priceless' slogan.

So for a snapshot of what credit card advertising used to look like, check out this curated collection of 19 ads from yesteryear. 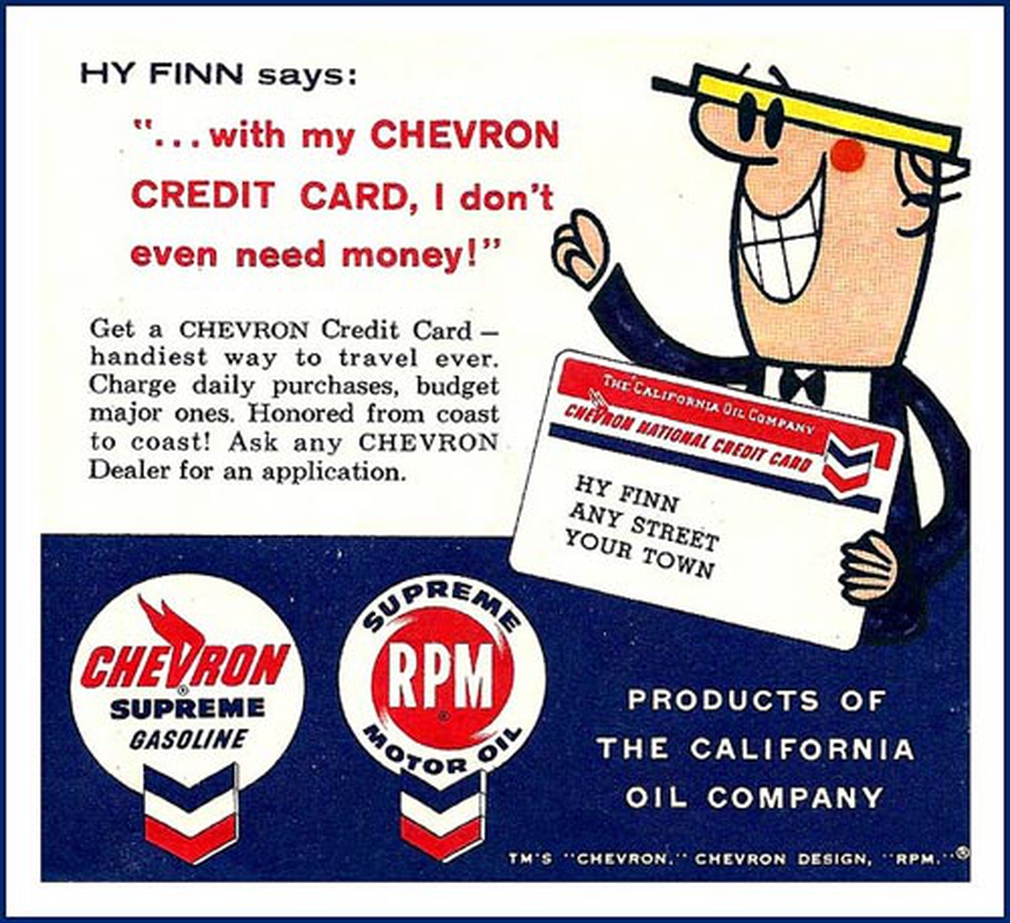 This classically styled ad is for the Chevron Credit Card, which motorists could use 'coast to coast' while driving in the USA. The cartoon character featured in the ad is Hy Finn, Chevron's mascot who appeared in much of the company's promotional material during the 1950s and 60s. 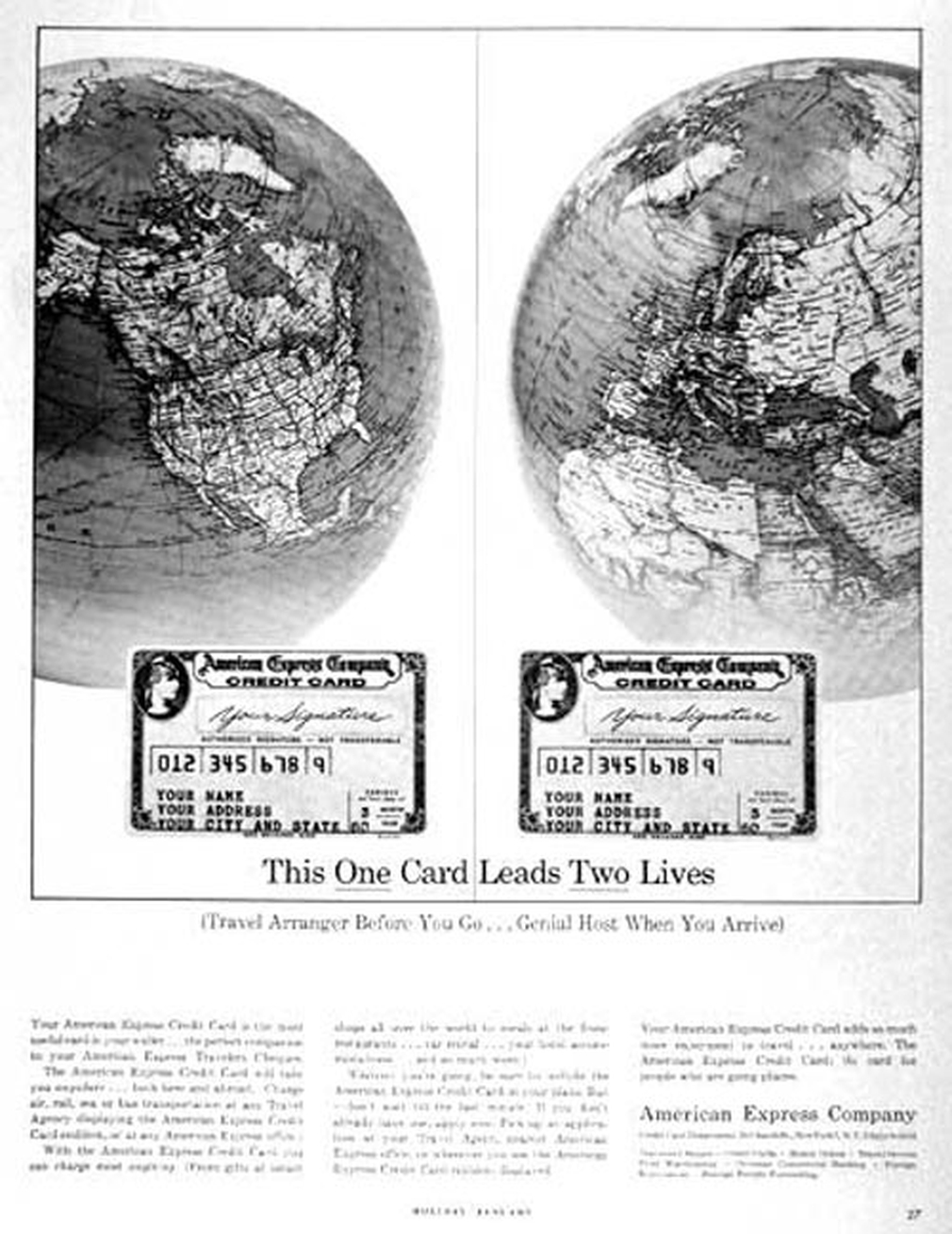 American Express started out as an express mail service in 1850, and then developed into a major money order business with its Traveller's Cheques in the 20th Century. In the late-1950s, the company introduced the first plastic charge card that could be used internationally, and would go on to become one of the world's biggest credit card businesses. This print ad is typical of the American Express brand image: the trusted card used by modern international travellers. 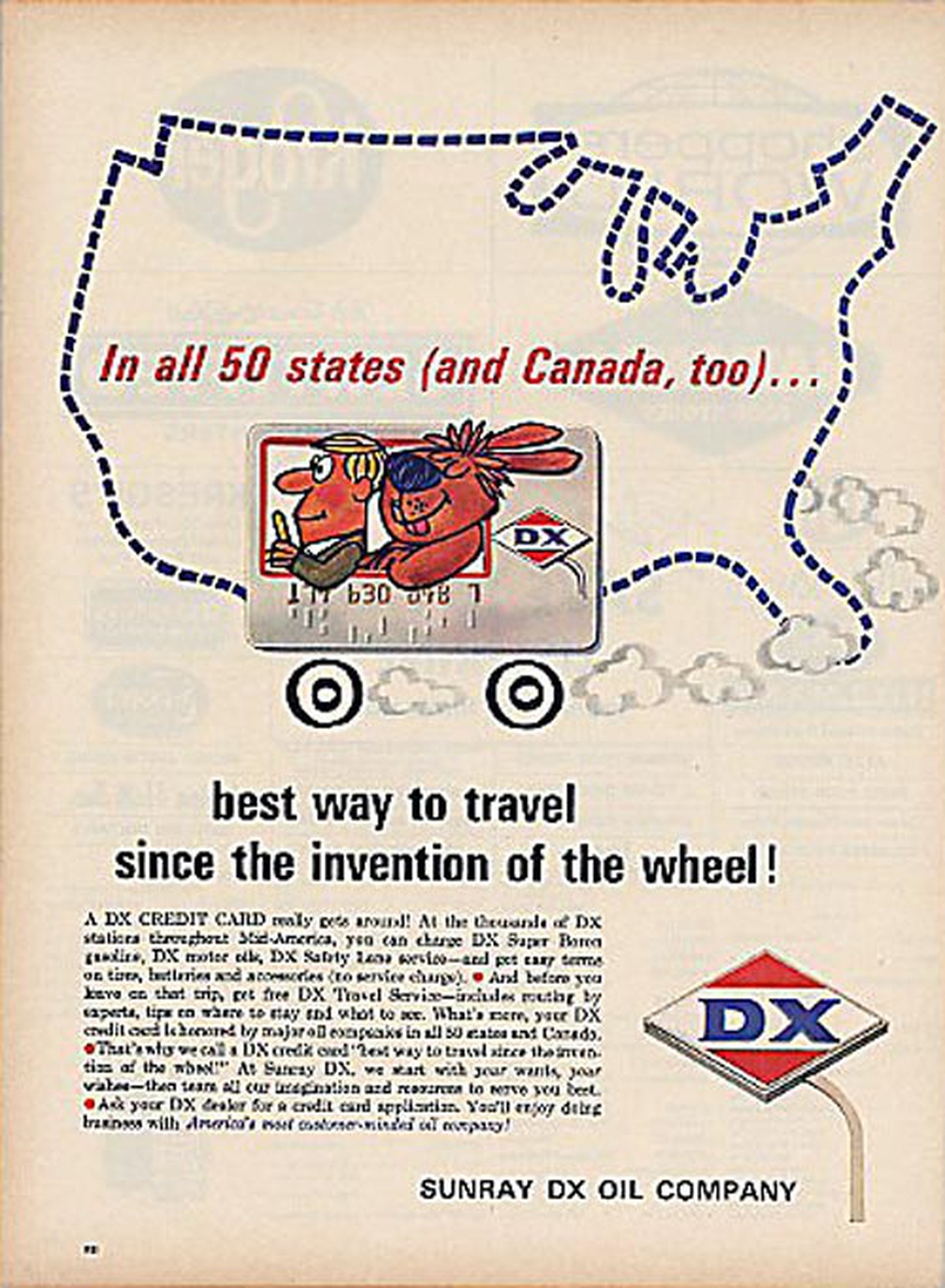 A print ad from 1965, promoting the DX Credit Card, which was accepted in thousands of US outlets (and in Canada, too). 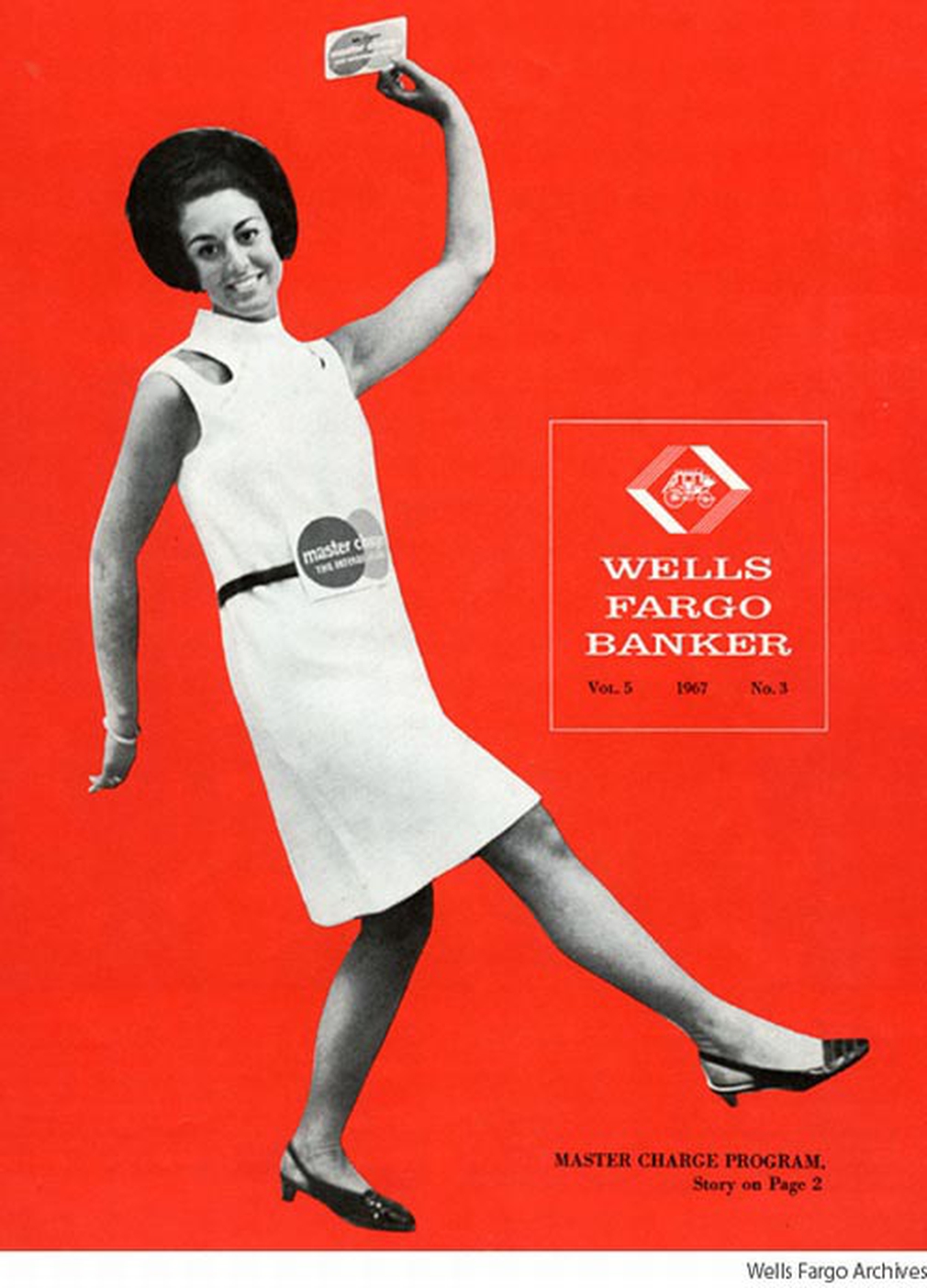 In 1967, Wells Fargo launched a card using the Master Charge system. This striking image was used on the cover of the company's promotional magazine to alert customers to this exciting new service. 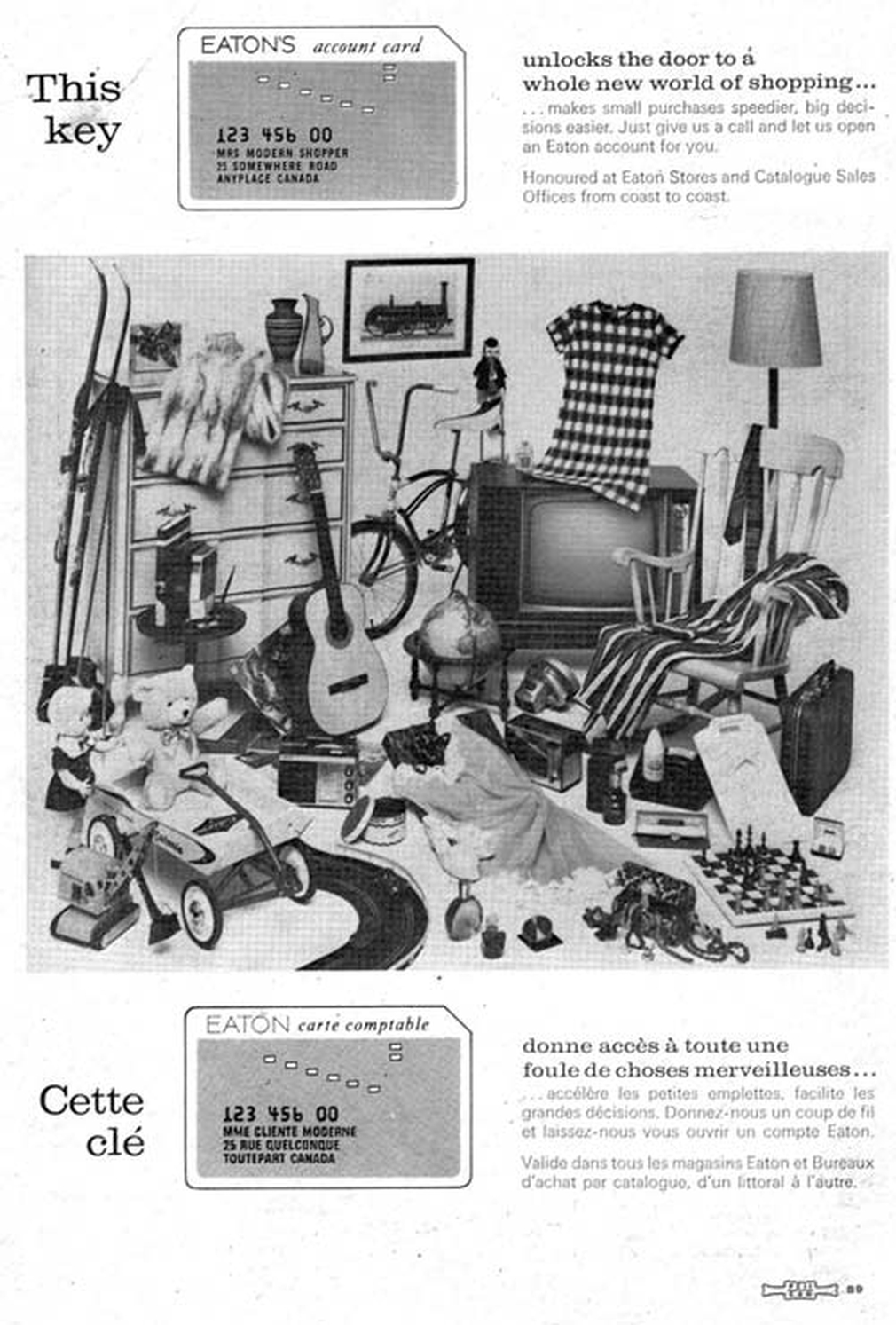 This bi-lingual vintage print ad is for the Eaton's account card, which in itself was a vintage piece of charge card technology. The card, with its distinctive cropped-corner design, used a punch card system, allowing customers to make purchases against their Eaton's account throughout the chain of shops. 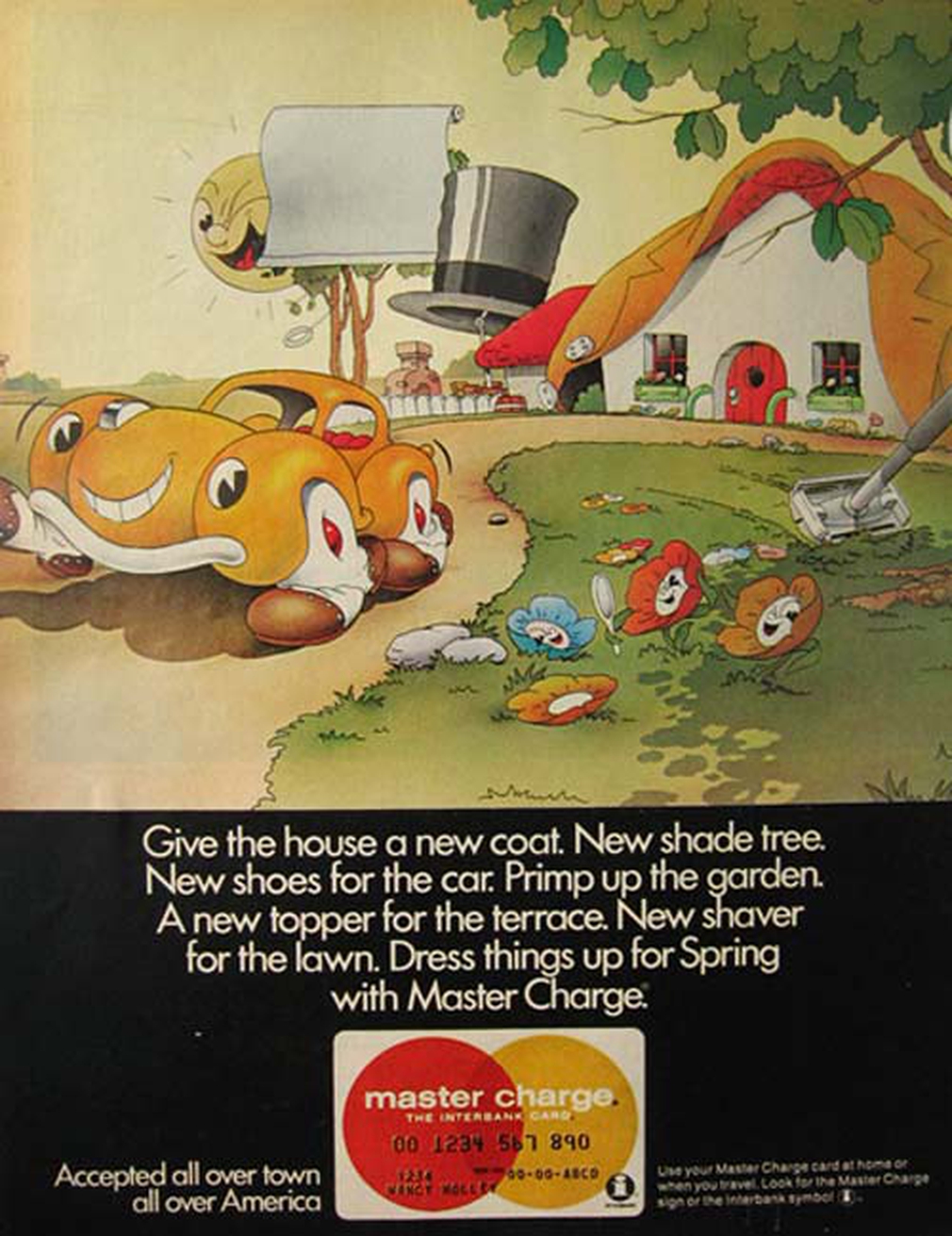 This cheerful piece of cartoon-style print advertising was created by Doug Johnson Art to promote Master Charge. The design, created in 1970, is both nostalgic for a golden era of American animation and optimistic about the possibilities of consumer credit. 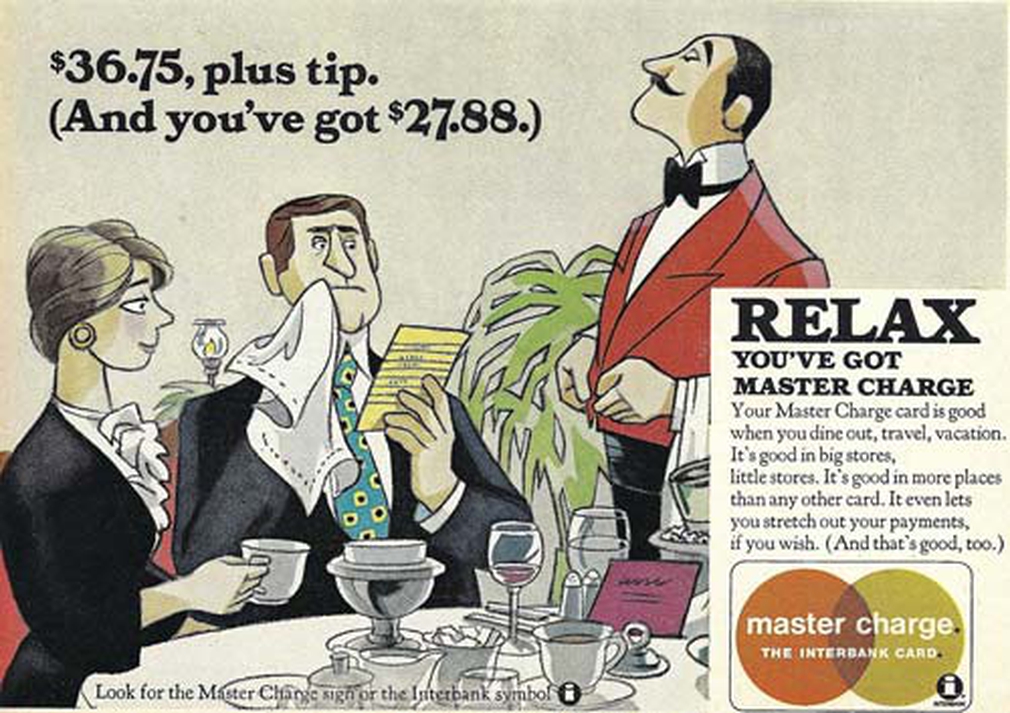 This is another Master Charge print ad from the 1970s, promoting the card's use for dining out, travelling and vacations. 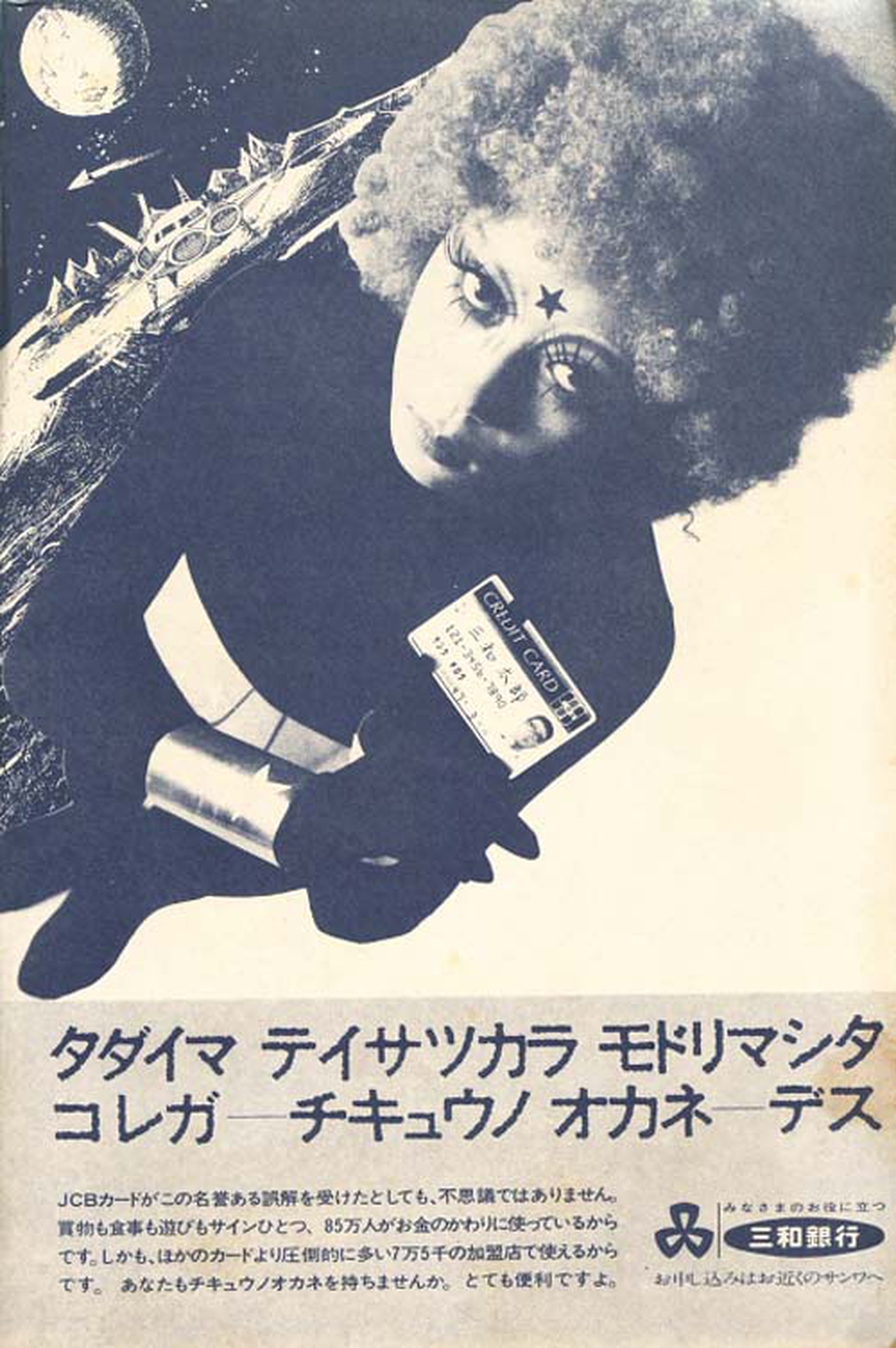 In the early 1970s, Japan's Sanwa Bank produced a collection somewhat outlandish sci-fi-inspired print ads for the JCB credit card. This poster, one of the series, has a futuristic space traveller presenting the JCB card and stating, 'I'm back from my reconnaissance mission. This is Earth money.' 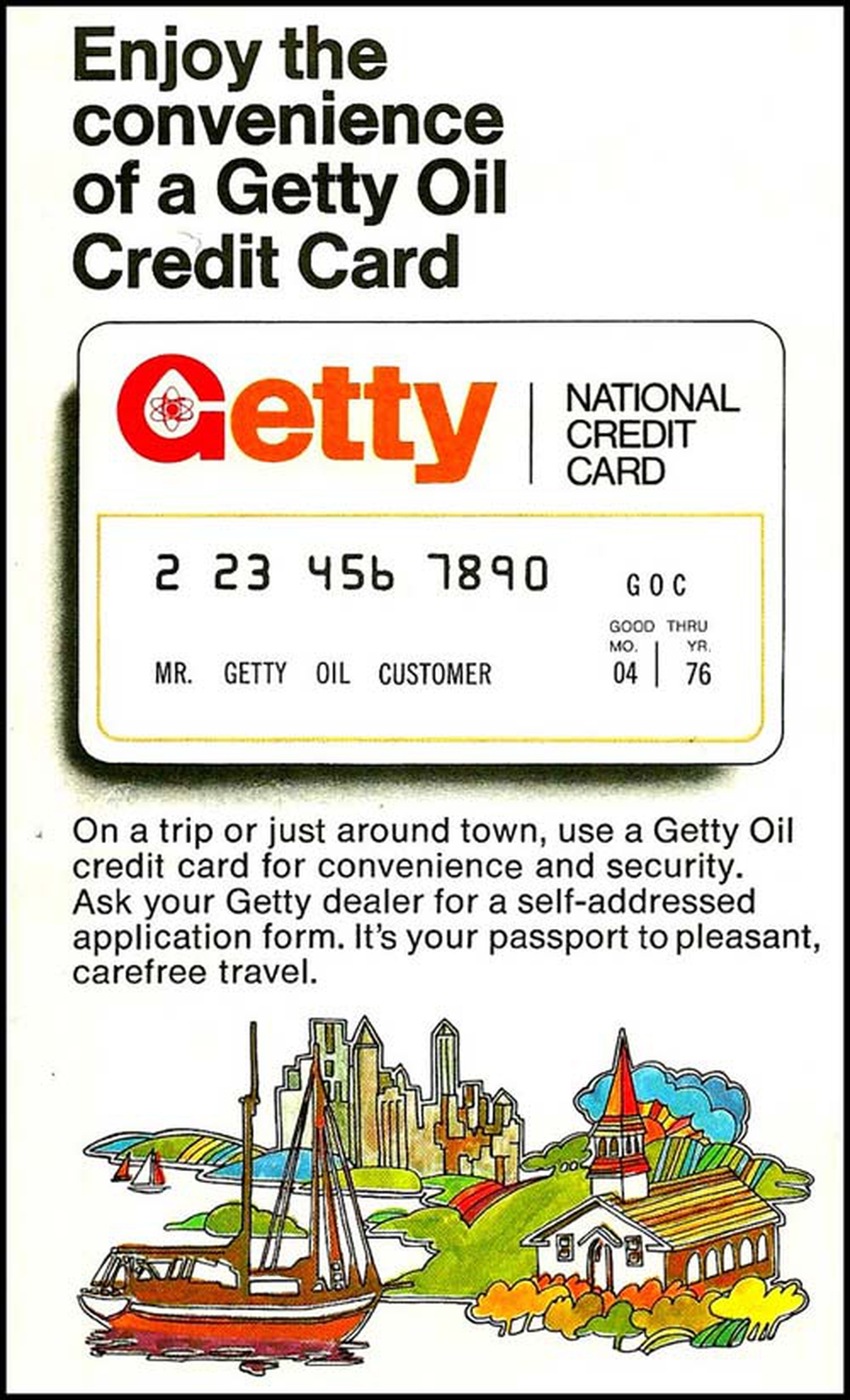 This print ad from the mid-1970s employs a nice, clean and friendly aesthetic to promote the benefits of the Getty Oil credit card: 'Convenience and security...it's your passport to pleasant, carefree travel.' 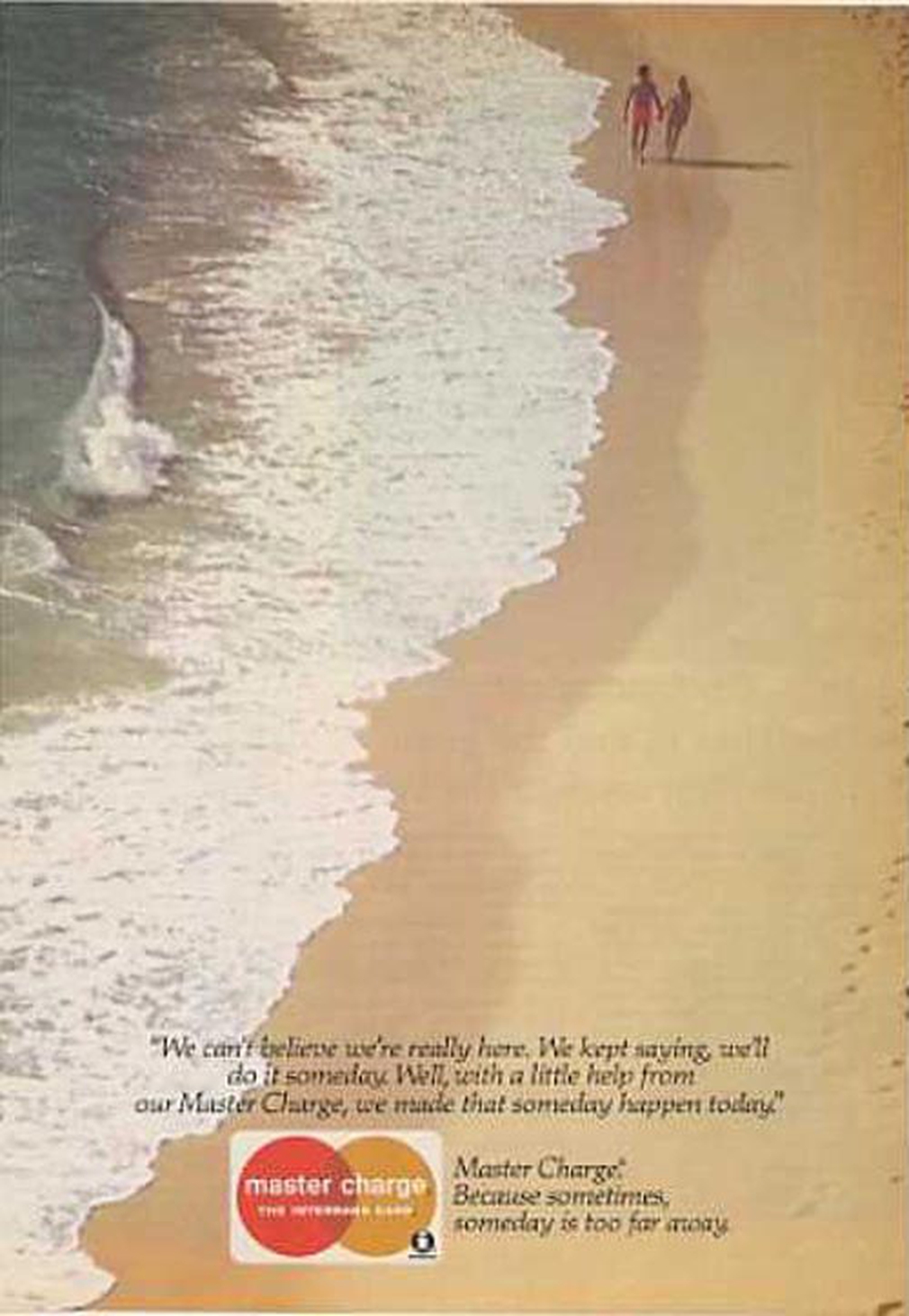 Master Charge: The Interbank Card, the service that would later become MasterCard, used a distinctive logo and eye-catching imagery in its print ads of the 1970s. This ad, from 1976, shows a desirable image of a couple strolling on a sandy beach, thanking Master Charge for making the romantic scene possible. 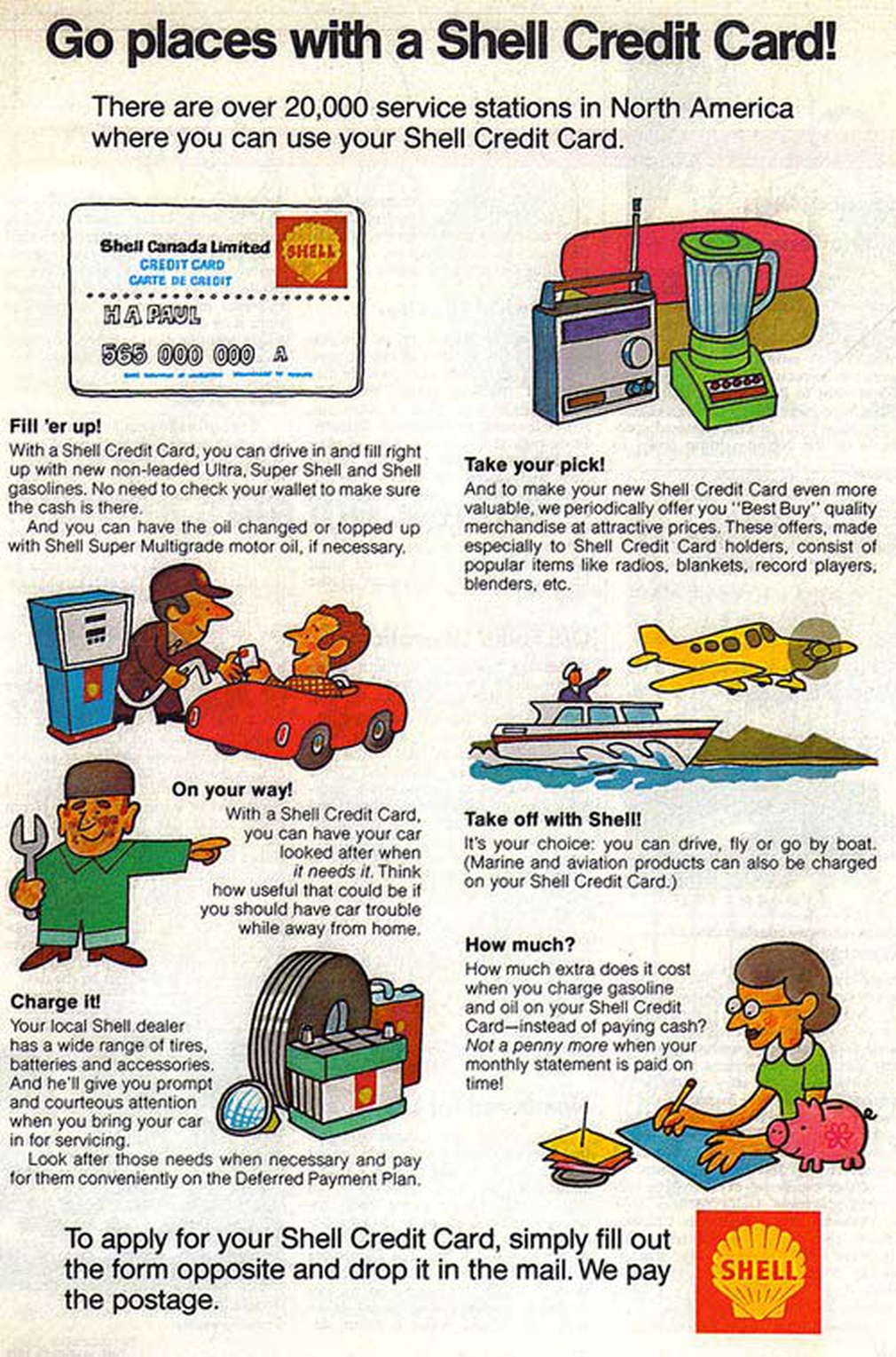 Along with appealing to customers' lifestyle aspirations, print ads also emphasised the simplicity and convenience of credit cards in the modern world. This 1977 ad for the Shell Credit Card uses friendly cartoon graphics and accessible language to show how the product makes life easy. 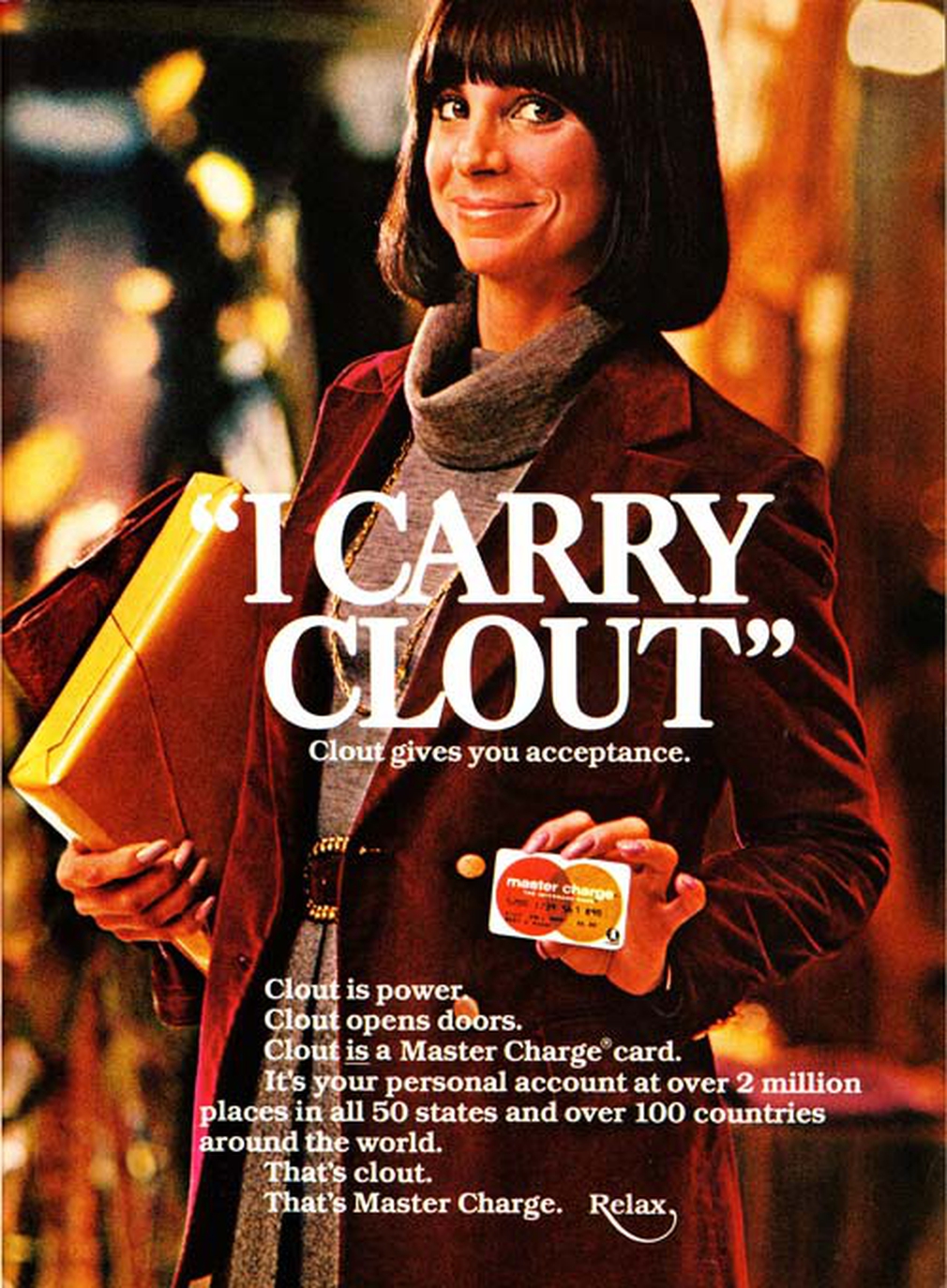 This is another ad for Master Charge, highlighting the 'clout' that the credit card carries. In the 1960s and 70s there was a massive increase in international tourism, and travellers found credit cards a convenient way of making payments abroad. This ad boasts that card is accepted 'at over 2 million places in all 50 states and over 100 countries.' 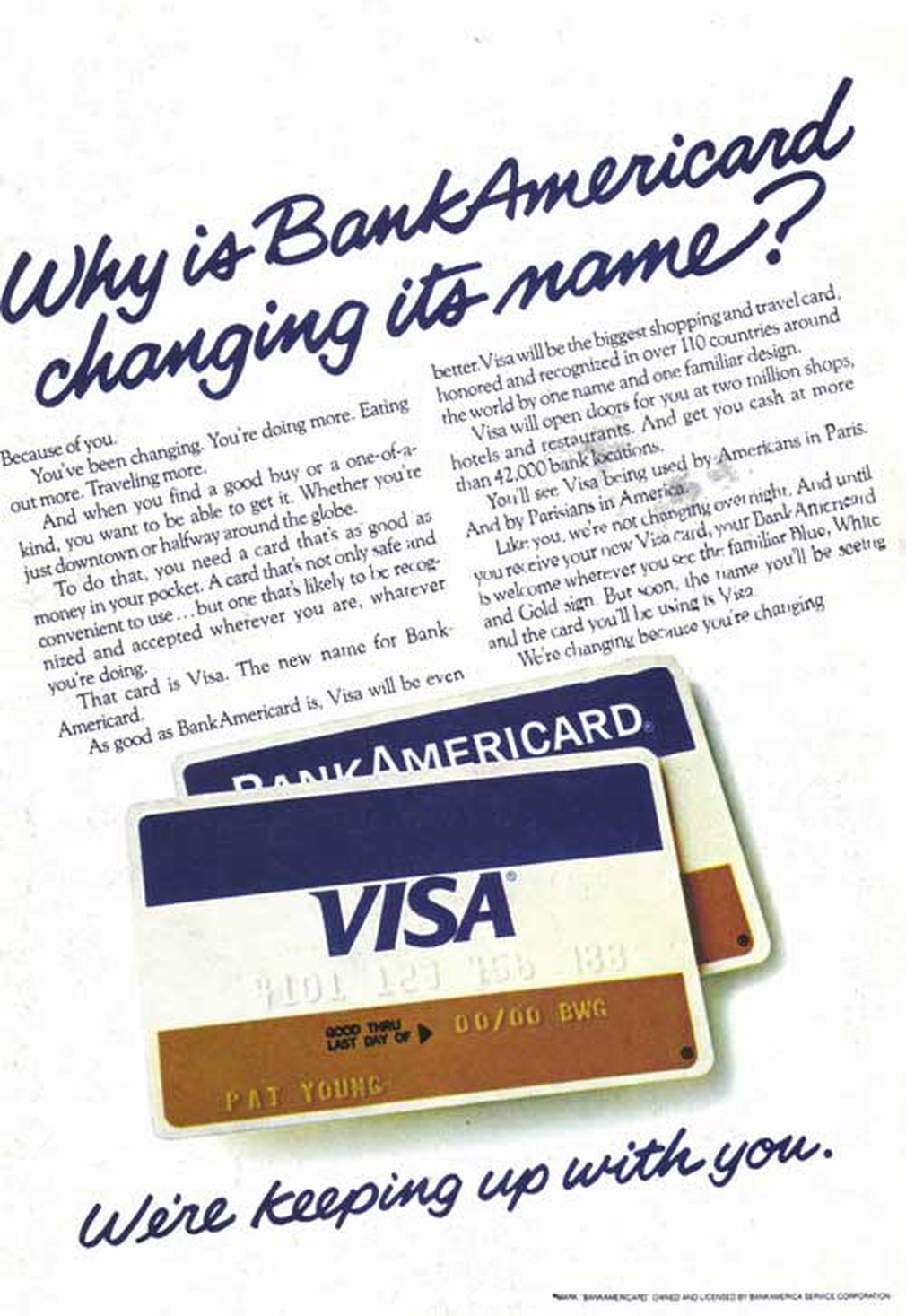 From the late 1950s onwards, Bank of America's BankAmericard credit card was a pioneering system on the market. In the 60s many banks around the world adopted the system and issued localised cards, such as Barclaycard in the UK. In 1975, all the international variants of the program were brought under a single system with a new name, 'Visa'. This ad, which appeared in the July 1977 issue of the National Geographic, explains the change of name and the added benefits of the new Visa card, with its distinctive blue, white and gold flag design. 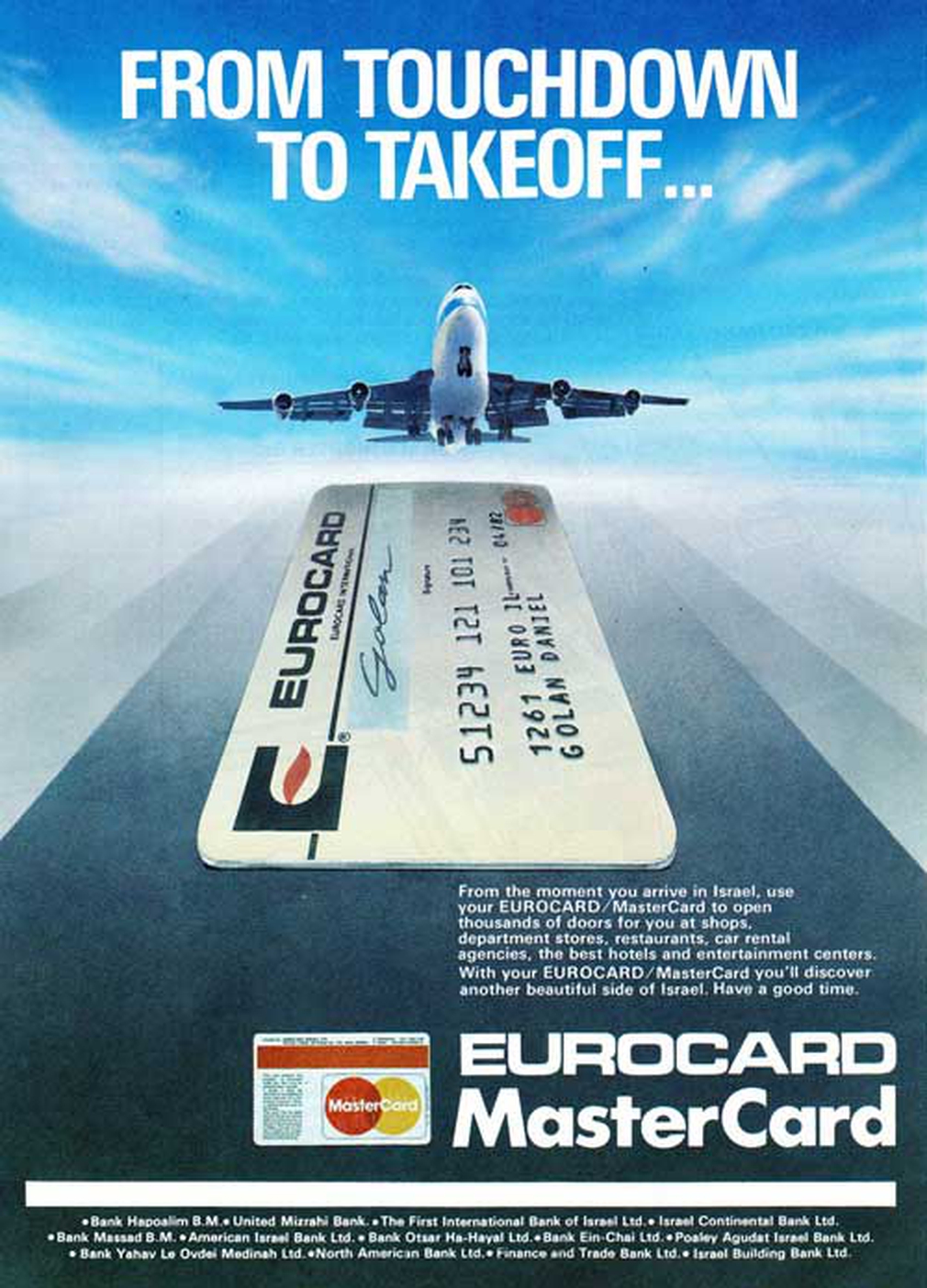 In the mid-60s, the EUROCARD was launched as European alternative to American Express, and in 1968 was aligned with MasterCard to extend the international markets available to both systems. This dynamic print ad from the early-80s promoted the benefits of using your EUROCARD/MasterCard when visiting Israel. 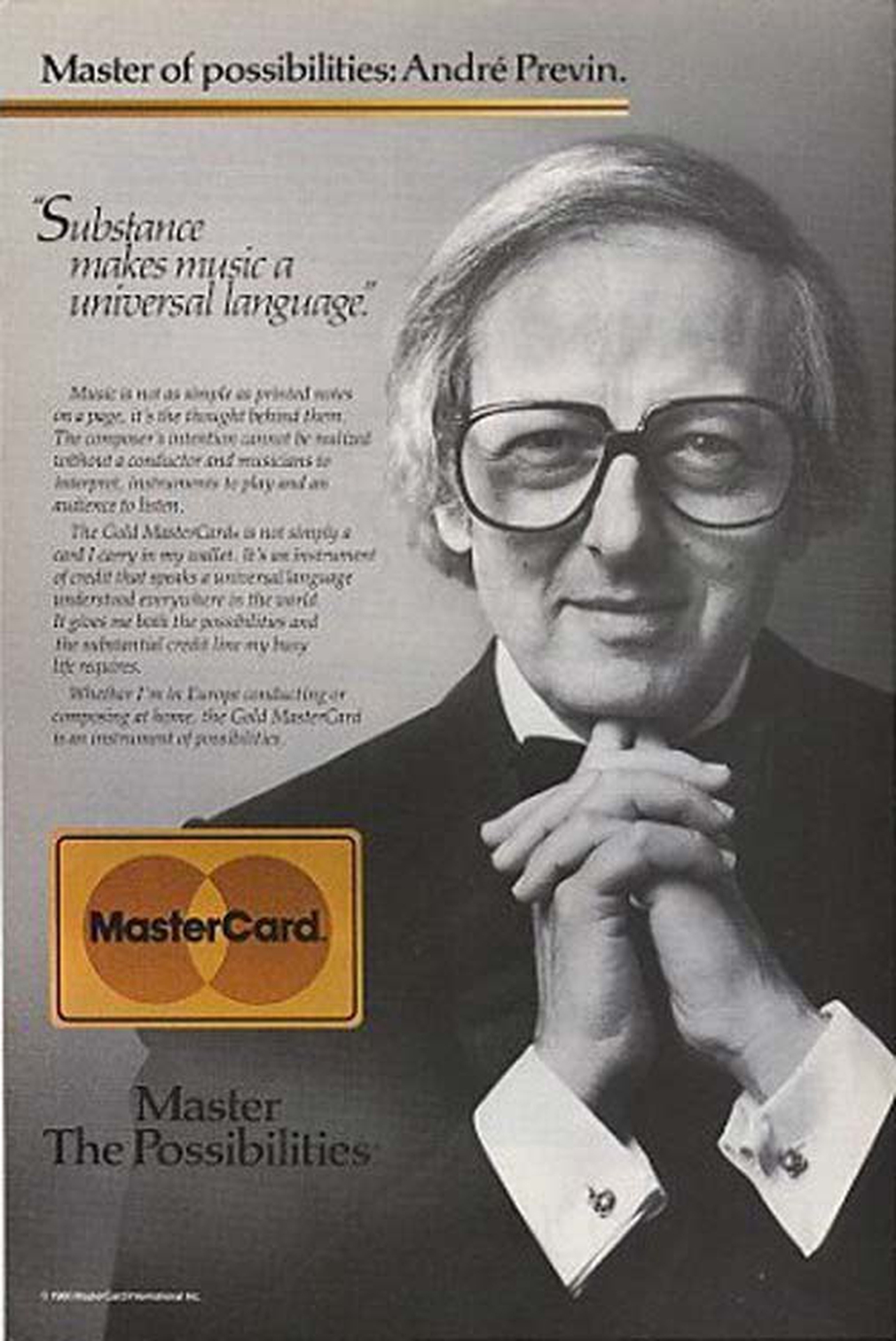 Celebrity endorsement is a powerful force in print advertising. This 1986 MasterCard ad features André Previn, one of the most important figures in 20th Century classical music. Previn is quoted, 'Substance makes music a universal language,' and the ad describes both credit card and composer as 'Master of Possibilities.' 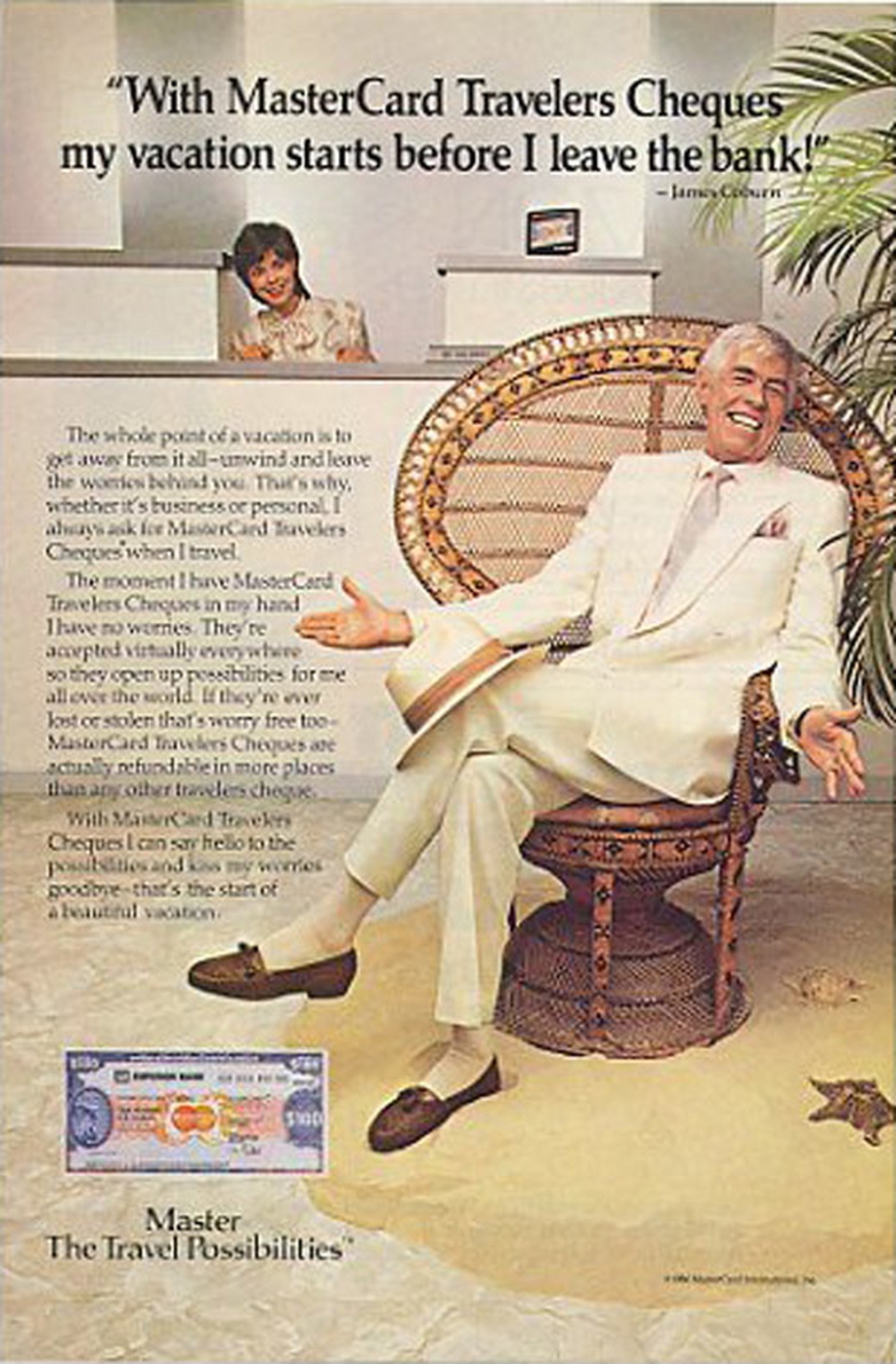 In another celebrity-endorsed print ad, American actor James Coburn announces, 'with MasterCard Travellers Cheques my vacation starts before I leave the bank!' 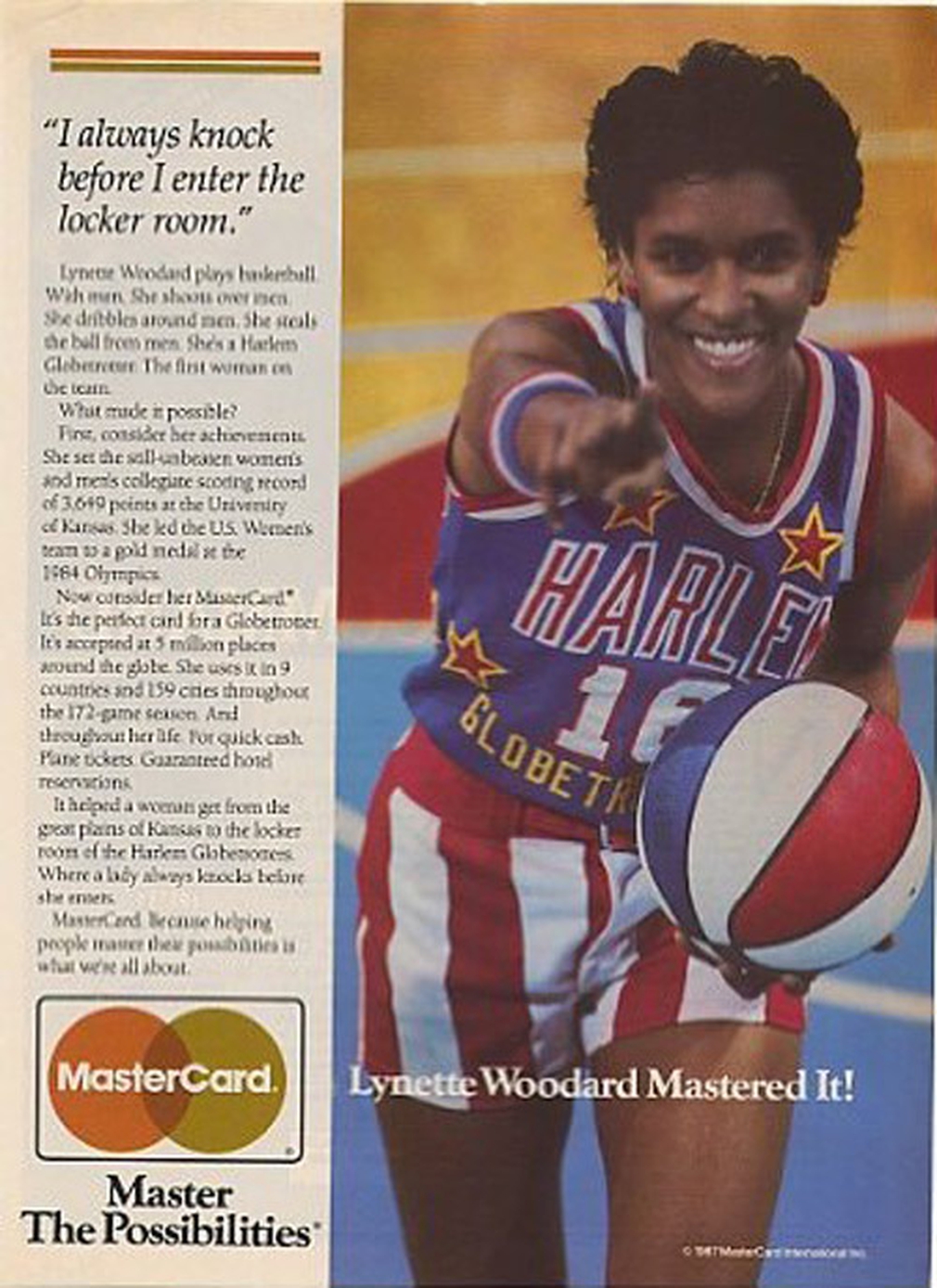 This MasterCard print ad features Lynette Woodard, the American basketball star who made history as the first female player for the Harlem Globetrotters. 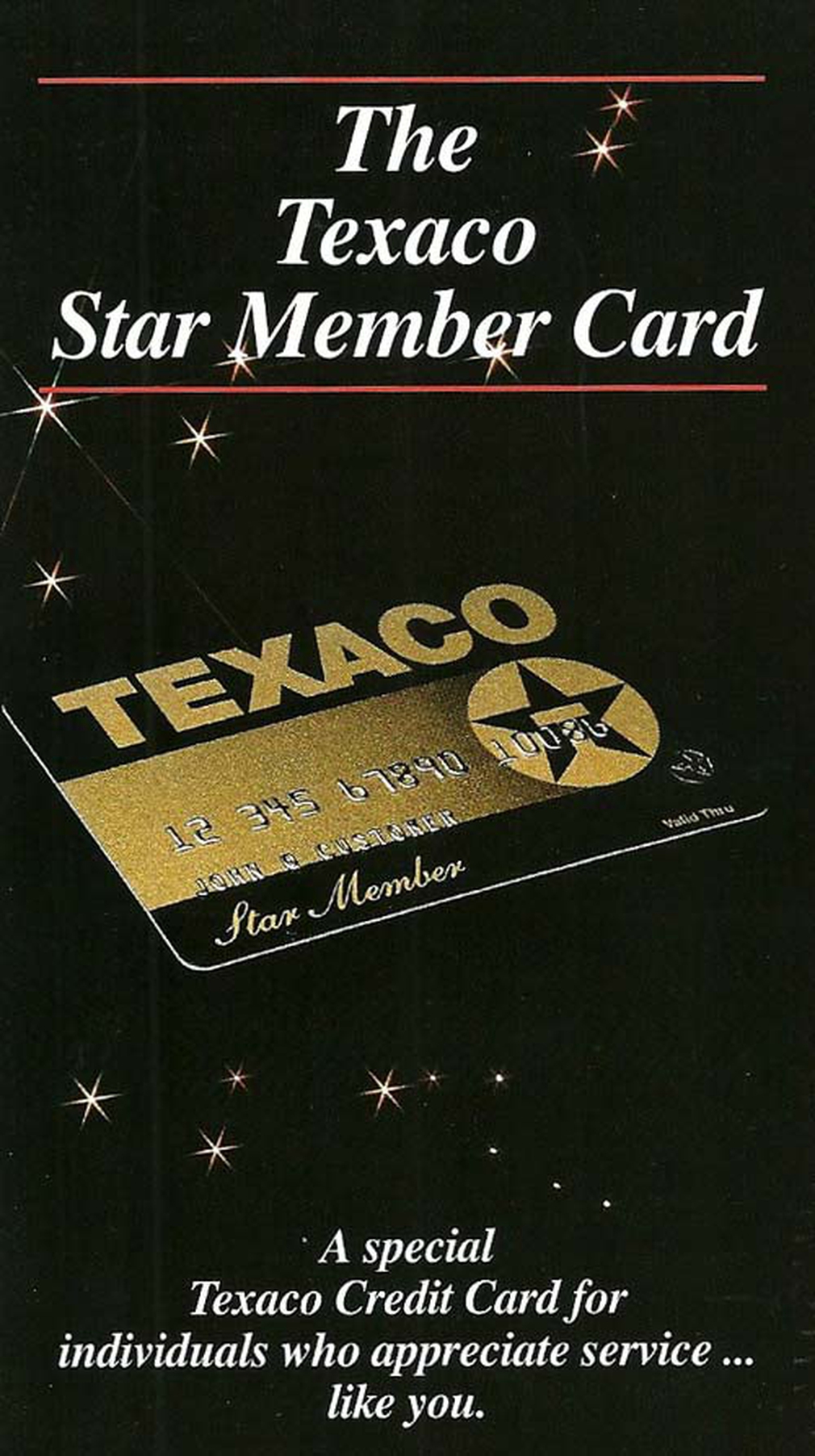 Finally, this is a vintage print ad for the Texaco Credit Card from the early-1990s. As with many of the ads presented above, the design aims to appeal to trusted customers, rewarding loyalty with a special Star Member Card. Over the 30 years covered in this post we can see how credit card advertising has evolved while retaining it's essential messages, and developed into the global credit card super-brands of today.

This post was originally published in June 2011 and has been updated for freshness, accuracy, and comprehensiveness. 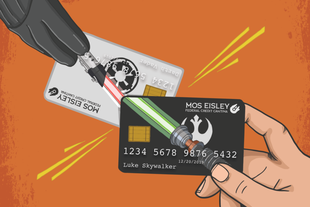 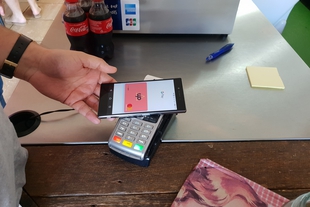 Is Up Bank the future for time-poor millennials? 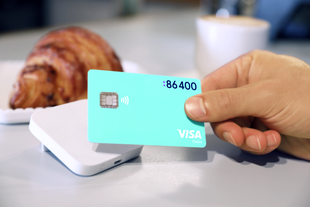